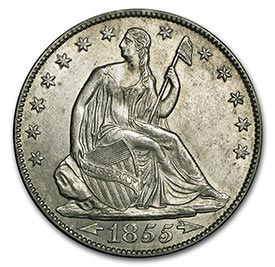 The half dollar has been struck with few interruptions from the beginning of U.S. coinage to the present day. These were sanctioned originally in the Coinage Act of 1792, and the half dollar has been one of the foundational coins of the U.S. monetary system for most of the time since until it fell out of favor in the 20th century. They were first minted in 1794. The Liberty Seated variety ran from 1839 to 1891, when it was replaced by the Barber.

The half dollar was struck for circulation first a few years after its smaller sibling the half dollar and was based on the same planchet. Early half dollars were struck from 89.24% Silver and 10.76% Copper, an alloy that was slightly modified at the time of the Liberty Seated release. The alloy was changed at that point to 90% Silver, a percentage it would retain until the demise of most U.S. Silver coinage in 1964.

The Liberty Seated series had a picture of Liberty sitting on a rock, holding a Liberty pole with a Phrygian cap on the top (this symbol of freedom can be seen prominently in Capped Bust coins). The reverse on smaller coins had a wreath of laurel leaves through 1860 and on larger coins such as the quarter, half dollar and dollar this design had an eagle. After 1860 the wreath was expanded to include other plants.

This coin saw a number of small variations over the course of its minting, including different number sizes, changes to the drapery around Liberty, number and size of stars and more. One variety of note is the arrow by the date, which indicated a slight change in the size of the coin to bring the intrinsic value of the metal more in line with the face value. This change occurred from 1853 to 1855 and from 1873 to 1874. After a couple of years they were changed back to the variant they had been before the arrows were implemented, as this was only a temporary measure to get people used to the changed coinage. The Liberty Seated survived through the Civil War, though many hoarded coins during this time period.

These coins stayed in production till 1891, but changes in public approval and a push towards more interesting coinage led to the redesign of all varieties that could be legally altered at the time, including the half dollar. This created the Barber series.

Early U.S. coins were not the only coins the post-colonial America had. French, Spanish and English coins circulated freely and were accepted as legal tender, and the mintage of new U.S. money did not stop these from circulating. The half dollar circulated but competed against these coins, particularly these early Bust half dollars. These were important because they were among the first U.S. coins minted, but in terms of day-to-day living at the time of their mintage their impact was muted.

The Coinage Act of 1857 occurred while the Liberty Seated was being minted. Businesses which had previously accepted any form of money as legal tender now would only accept U.S. coins, and that drove demand far exceeding that of previous years. That set the stage for our current monetary system.

Liberty Seated half dollars are available for a reasonable price in many years in low grades, but the price rises rapidly for higher grades. There are some very expensive and rare examples from branch mints, especially the unique Carson City variants.

The higher populations of series like the Liberty Seated as opposed to earlier half dollars make them a much easier prospect for intermediate collectors. Early examples of U.S. coinage including the half dollar are not easy to get one’s hands on.