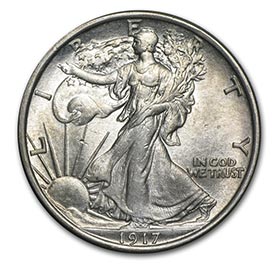 The half dollar has been struck with few interruptions from the beginning of U.S. coinage to the present day. These were sanctioned originally in the Coinage Act of 1792, and the half dollar has been one of the foundational coins of the U.S. monetary system for most of the time since until it fell out of favor in the 20th century. They were first minted in 1794. The Liberty Walking variety ran from 1916 to 1947, when it was replaced by the Franklin.

The Liberty Walking came after the Barber, and it ran from 1916 to 1947. These coins were created by Adolph A. Weinman as a replacement for the Barber designs because the director of the U.S. Mint, Robert W. Woolley, thought that the 25-year minimum for a new coin design was actually a mandate to create a new coin when the time period was up.

Weinman’s design shows Liberty walking and holding a bundle of branches with an American flag over her shoulder and the sun behind her. The reverse is an eagle on a mountaintop. The coins had a higher relief than many other coins of the time and striking was challenging. Barber and other proponents of practical coinage concerns over aesthetics were not fans of the new designs created by sculptors who were not necessarily familiar with the ins and outs of the striking process. There were issues with the dime and the half dollar when they were first struck, as the edge had a “fin” or raised lip that did not work well with vending machines. Barber created modified designs, but after intercession from others the design was struck as is with a slightly lower relief and some modifications to the strike.

The Liberty Walking holds a special place in the American psyche due to its association with World Wars I and II. Adolph A. Weinman’s design for the obverse of the coin was so iconic it has been reused for other coins including the famous Eagle bullion coins. The redesign of the half dollar coincided with the redesign of the last few coins which had not had a refresh, and this was the time period where every coin first had a unique design.

Condition for these plays a key role in their value, as many were well circulated. In general, the older this coin is the more valuable it is. Branch mint versions are also more valuable than regular issues, particularly in high grades and early issues.