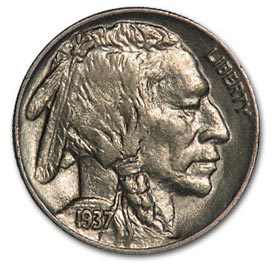 The Buffalo nickel is one of the most iconic pieces of American coinage, and it was struck from 1913 to 1938. These nickels have been among the most common beginner coin for years, and the design is one of the best known in U.S. coinage. The coins did not strike well and were subject to wear, so many of these have problems with the strike, or have lost details on the design. But they are one of the most collected U.S. coins ever.

The original nickel was made of 75% copper and 25% nickel, the same ratio used in today’s five-cent nickels. This composition has stayed the same for all nickels with the exception of the Silver alloy war nickels (from 1942-1945), regardless of denomination or series.

There was a drive to make U.S. coinage more beautiful around this time, and the Buffalo nickel was part of it. President Theodore Roosevelt had indicated his dissatisfaction with the current state of American coinage during his presidency in 1904, but the 1890 Coinage Act kept him from redesigning all of the coins. Coinage was only able to be redesigned without an act of Congress every 25 years, and so the famous Saint-Gaudens gold pieces and the cent were redesigned around this time. Other coins would have to be redesigned later, and they were.

Sculptor James Earle Fraser was commissioned to do the design, and he chose to use a Native American man as the model for one of his designs. Fraser had been an assistant to the famous Saint-Gaudens, and he approached the U.S. Mint to offer concepts when they announced the nickel was to be redesigned. There were three designs submitted and the Indian Head/Buffalo obverse and reverse were chosen as the finalists.

The design of the coin caused some controversy at the time. Vending machines based on nickels had grown popular, and before the coin was struck some coin manufacturers began to inquire about changes. Most were satisfied when it became known that the major dimensions of the nickel would not change.

The Buffalo nickel had a portrait of a Native American on the obverse and a buffalo on the reverse. Originally the nickel had the buffalo standing on a sort of mound, but it was later refined to a more stylized line. These are often referred to as Type I and Type II.

The first Buffalo nickels were struck in 1913, and quickly ran into a problem: the dies were wearing away much quicker than anticipated. This was the genesis of the Type II design which was carried out through the remainder of the series. The Buffalo Nickel had trouble keeping its design intact, despite numerous minor changes over the course of the series which were meant to increase durability.

The Buffalo nickel was part of the renaissance of American coinage, and as such these nickels were known for their beauty as opposed to many previous coins. They were specifically struck as part of a movement to make coins as beautiful as they were functional. They were the entry point for many collectors, as they could be found in pocket change when older numismatists were getting their start or purchased for a very low price.

Buffalo nickels were minted in large numbers, making even runs from smaller mints available to collectors for a reasonable price. Early examples are usually more expensive than later examples in comparable grades. This coin has a couple of notable errors, most famously the 1937-D “three-legged buffalo”. These can get rarer and more expensive in their higher grades.