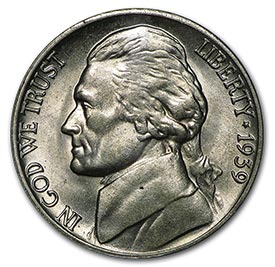 The Jefferson nickel replaced the iconic Buffalo nickel and was struck from 1938 to 2003. The Buffalo nickel was well liked by numismatists and collectors, but it was not liked as much by Mint authorities who dealt with breakage and bad strikes. These coins were hard to strike and were replaced by the Jefferson after the mandatory 25-year period when new designs could be created without congressional approval.

The problems of the Buffalo nickel made it important to find a new nickel design. Since the inception of the nickel, the hardness of the metal had caused issues with striking, and the Buffalo nickel design only made it worse. This design did not strike as well as it should have and dies wore out very quickly. This did not stop it from a long run, but it did stop it from continuing past its time.

The redesign of the nickel was opened up to the public as a contest, and the winner would receive a prize of $1,000 and their design used for one of the most common U.S. coins. Felix Schlag, a recent German immigrant, won. His design was changed after the fact when he was asked to create a different reverse. The original design of Monticello on the reverse of the coin was more modern-looking, while the design that can still be found on much of our pocket change today was a replacement that was formal and plain.

The obverse bears the face of Thomas Jefferson in profile, while the reverse shows his famous home Monticello. Early strikes had a much muddier-looking set of steps, which was sharpened in 1939.

Nickels have been struck from a 75% Copper, 25% nickel planchet since their inception, but during the Jefferson nickel series there was a special exception. During World War II nickel became an essential material for the war effort, and as a result the Mint decided to change the composition of the coin. From the middle of 1942 to 1945, nickels were struck from 56% Copper, 35% Silver and 9% manganese. These nickels are distinguishable by the prominent mint mark above Monticello on the reverse, and this was the first time the “P” mint mark for Philadelphia was used on U.S. coinage.

War nickels were replaced in 1945 with the traditional cupro-nickel planchet, as had been used prior to the war, and continued largely unchanged until 2003. There were a few minor modifications to the design, mainly the sharpening of certain design elements for better strikes, but the Jefferson nickel has endured with little difference.

In 2004 the nickel was redesigned with a rotating design, but it returned to the Monticello reverse after 2005.

The Jefferson nickel holds little numismatic value outside of errors, with notable ones being the 1939 doubled Monticello/five cents, the 1942D D over horizontal D, several War Nickel variants and some later overstrikes. Other key dates include the 1938-D, 1939-D and the 1950-D.