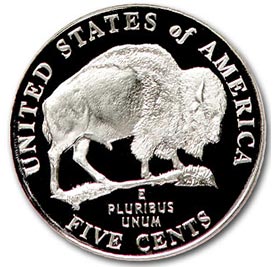 The modern Jefferson nickel began in 2003, when new designs were authorized to replace the iconic coin. Representative Eric Cantor was approached by U.S. Mint officials about the quest to find a new design for the coin and sponsored a bill to replace the 2004 and 2005 nickels with the Westward Journey nickels that had a variety of rotating designs to honor the Lewis and Clark expeditions. The coin then returned to a modified version of the original Felix Schlag design, as Cantor had designed this bill to keep his home state’s Monticello as part of the reverse.

The obverse of the original Jefferson nickel bears the face of Thomas Jefferson in profile, while the reverse shows his famous home Monticello. Felix Schlag was responsible for creating the design, as the winner of a contest for the new nickel that replaced the Buffalo nickel. Early strikes had a much muddier-looking set of steps, which was sharpened in 1939. Later strikes further sharpened the coin.

The Westward Journey coins which replaced the Jefferson nickel were made with the old Felix Schlag portrait of Jefferson in profile on the obverse in 2004, but in 2005 they switched to a newer portrait designed by Joe Fitzgerald and sculpted by Don Everhart. This design was inspired by a 1789 bust created by Jean-Antoine Houdon. The word “Liberty” is inscribed next to Jefferson’s face, and the script is patterned after his handwriting. This portrait was only used in 2005, replaced by another version while the reverse has switched back to the Monticello design created by Schlag.

The 2004 Westward Journey nickel had two reverses: a peace medal designed from the original medals made for the 1803 expedition and a keelboat of the sort that Lewis and Clark used on their journey. The two 2005 reverses were a bison, significant to the Native American tribes, and the cliffs of the Pacific Ocean with an inscription from Clark’s journal: “Ocean in view! O! The joy!”

The 2006 nickel saw another revision of Jefferson’s face, with this version keeping the “Liberty” inscription but changing to a facing portrait. This was designed by Jamie Franki and sculpted by Donna Weaver and continues to run today.

Nickels have been struck from a 75% Copper, 25% nickel planchet since their inception, with the exception of the 1942 to 1945 War nickels. The modern nickel design continues the same and will likely continue unchanged for a long time to come.

Modern nickels continued the trend of changing the obverse for limited run series that saw such popularity with the 50 State quarters. Overall, there is not that much historical significance for these other than the bill that signed off on the design going through Congress, a change from many previous coins.

New nickels hold little numismatic value as of right now, with huge mintages being available. These coins are very common even in proof quality. They are a good set to collect for beginning numismatists though, as the Westward Journey coins are affordable and easy to find.