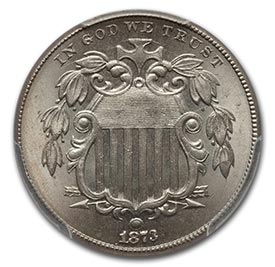 The first U.S. five-cent nickel was struck starting in 1866, and it has become one of the essential denominations of American coinage since that time. Base metal coins were not that common at the time but the nickel changed that. The nickel was part of a bill that introduced new base metal coinage to American money. The Shield nickel is slightly smaller than what is currently in our pocket change as it measures out at 20.5mm instead of the now standard 21.2mm.

The original nickel was made of 75% copper and 25% nickel, the same ratio used in today’s five-cent nickels. This composition has stayed the same for all nickels with the exception of the Silver alloy war nickels (from 1942-1945), regardless of denomination or series.

Joseph Wharton was a magnate who controlled much of the nickel mining in the United States at the time the first nickels were struck, and with the help of some of his friends in Congress he was a major proponent of nickel’s use in coinage. The U.S. Mint had been skeptical of nickel coins, but the three-cent coin was successful enough to pave the way for other denominations, and Wharton’s supporters won the five-cent nickel in 1866 after the successful first year of the three-cent nickel. This began the Shield design.

The planchets for nickel coins were very hard — harder than the Silver, Gold and Copper that they were replacing. This made striking difficult. Even with simple designs they were prone to bad strikes. The design of the Shield nickel was panned by many, and it caused issues with striking. Design changes were not enough to fix it, but after a few years of heavy mintages circulation was good enough that new runs were small.

The namesake of the Shield is its obverse, which depicts a shield with several other design elements surrounding it. The reverse has the denomination surrounded by stars, and as is the case with 1866 and some 1867 coins, the stars were interposed with rays. The obverse is based on the same design as the short-lived two-cent piece, and it draws the same inspiration from the Great Seal of the United States.

At the time, this coin was up against a few other small-denomination coins, namely the half dime, the three-cent nickel, the three-cent Silver piece and the two-cent piece. The other denominations ended, but the Shield nickel found its place and endured, and its descendants are in our pockets to this day.

Though it was disliked for its design, it played a key role in popularizing base metal coinage in the U.S. and laid the groundwork of much of the U.S. Mint’s work since, particularly since 1964 when most Precious Metal coinage disappeared from American pockets.

Five-cent nickels were among the first base metal coins in the U.S., and these coins served as something of a proof of concept for base metal advocates. The three-cent nickel may have come first but the Shield nickel outlasted it and became commonly used in small transactions, something many of the other small-denomination coins of the time could not say.