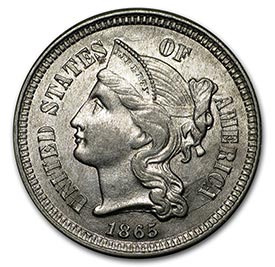 The U.S. Three-cent nickel was minted from 1865 to 1889, and slightly overlapped with the Three-cent Silver piece. The Three-cent Silver piece came about due to the decrease in postage rates, which dropped from five cents to three. This made it efficient to mint a smaller denomination coin that could handle the transaction easily. The nickel was part of a bill that introduced new base metal coinage to American money, and it ran alongside the much more popular five-cent nickel which we still have today.

The Three-cent nickel was made of 75% copper and 25% nickel, the same ratio used in today’s five-cent nickels. This composition has remained the same for all nickels with the exception of the Silver alloy war nickels (from 1942-1945), regardless of denomination or series.

Joseph Wharton was a magnate who controlled much of the nickel mining in the United States at the time. Wharton successfully lobbied Congress for the use of nickel in U.S. coinage. The U.S. Mint had been skeptical of nickel coins, but the three-cent coin was successful enough to pave the way for other denominations, and Wharton’s supporters won the five-cent nickel in 1866 after the successful first year of the three-cent nickel.

The planchets for nickel coins were very hard — harder than the Silver, Gold and Copper that they were replacing. This made striking difficult. Even with simple designs they were prone to bad strikes.

The obverse of the Three-cent nickel had a Liberty Head design created by James Barton Longacre, and the reverse was the Roman numeral of the denomination. Mintage declined over the course of its run and the change in postage put the final nail in this coin’s coffin, with its last issue coming in 1889.

Postage changes drove down the need for the Three-cent Silver and the later Three-cent nickel, and a variety of other factors caused its demise. Though the nickel lasted longer than the Silver coin, it died out around the time that postage changed from three cents to two. Three-cent nickels were made for a few more years but were no longer struck after the 1889 issue. Though it was more successful than the paper fractional currency notes, it never surpassed the popularity of the cent and five-cent pieces.

Three-cent nickels are much more common in dates of 1876 and earlier. After that point most mintages were very small (with the exception of one anomalous massive year in 1881). Premium quality 1883, 1884, and 1885 coins command a significant premium, and these are not common.