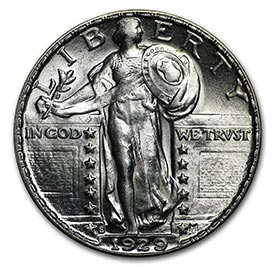 The quarter has been struck with few interruptions from the beginning of U.S. coinage to the present day. These were sanctioned originally in the Coinage Act of 1792, and the quarter has been one of the foundational coins of the U.S. monetary system from that point to the present day. They were first minted in 1796. The Standing Liberty type ran from 1916 to 1930, when it was replaced by the Washington.

The Standing Liberty came after the Barber, and it ran from 1916 to 1930. These coins were created as a replacement for the Barber designs because the director of the U.S. Mint, Robert W. Woolley, thought that the 25-year minimum for a new coin design was actually a mandate to create a new coin when the time period was up.

The Standing Liberty design shows Liberty in something of a militaristic posture, holding a shield in one hand and an olive branch in the other as she walks through a gate in a wall. This obverse came from Adolph Weinman. The reverse depicts an eagle in flight, similar to the Gobrecht dollar obverse. This design went through a few revisions before its creation and pattern coins exist with a variety of changes, but when MacNeil saw the changes the Mint had made without his input he was highly critical and the new quarters that were struck did not leave the mint. Liberty’s bare breast on the 1916 and some 1917 quarters was covered in the latter runs during 1917. These 1917 quarters are popular among collectors as they will collect both Type 1 (bare breast) and Type II (covered breast). The only other significant change came in 1925 when modifications were made to make the date last longer — and subsequent issues are more likely to have an intact date because of this change which lowered the relief.

Condition for these plays a key role in their value, as many were well circulated. In general the older the coin is, the more valuable it is. Which is usually not the case for any series. Branch mint versions are also more valuable than regular issues, particularly in high grades and early issues. The 1916 is a key date, and high grade specimens are hard to find due to the problems with dates wearing off.