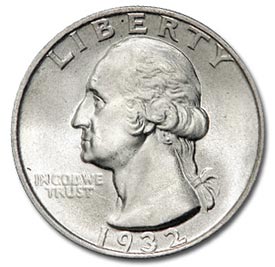 The Washington quarter was minted to replace the Standing Liberty quarter, which had some problems with durability. 1932 marked the bicentennial of George Washington’s birth, and the Bicentennial Committee wanted a coin to celebrate him. They chose the half dollar as their target.

Then-president Herbert Hoover disliked commemorative coins like the half dollars that had been common issues for the time period, and he expressed his concerns in his veto. Hoover pointed to counterfeit concerns and the number of commemoratives that went unsold.

The Bicentennial Committee and the Fine Arts Commission agreed to a half dollar with Washington’s face based on the bust created by Jean-Antoine Houdon, and a design was chosen through a contest. The winner, Laura Gardin Fraser, was the wife of the Buffalo nickel designer James Earle Fraser and a coin designer herself who created several commemorative coins.

Unfortunately for her, legislation was introduced in the House of Representatives for a Washington quarter, and it was quickly passed. Fraser’s design may have been accepted by the Bicentennial Committee and Fine Arts Commission, but the Treasury had not been consulted. They conducted their own contest for the quarter. Sculptor John Flanagan won the contest, and his obverse and reverse were used.

The obverse of the Washington quarter is a bust of George Washington based on a sculpture by Jean-Antoine Houdon. It was created after Houdon took a life mask of Washington, then used that to create a marble sculpture that now sits in the Virginia State Capitol. Both Flanagan and Fraser’s designs created their Washington rendition based on Houdon’s template.

The reverse is a heraldic eagle with its wings spread. This design lasted through 1998, and new state reverse designs were created in 1999. There was one break for 1975 to 1976 when the Bicentennial quarter was issued with a separate reverse commemorating the nation’s founding.

In 1999, the 50 State Quarters Program created new reverses with five states each year getting a unique reverse. In 2009 the District of Columbia and U.S. territories got their own reverses, then in 2010 a new program called the America the Beautiful Quarters Program was authorized to run through 2021. These reverses honor areas of natural or historic significance in the U.S.

The obverse design has stayed mostly the same with minor changes over the decades, though the reverse has changed several times. This obverse is one of the longest-lasting in American coinage, second only to the Lincoln cent.

The original composition of these coins was Silver, but as people began to hoard Silver coins through the early 1960s, the U.S. government began to consider other forms of coinage. In 1964 the quarter and dime were changed from 90% Silver to a cupro-nickel alloy. Half dollars were changed to 40% Silver.

Many of these quarters that were struck before 1964 are collected primarily for their Silver value and sold in bulk rolls or bags, but some are rare and highly collectible. In particular the 1932-D and 1932-S quarters are highly prized, particularly in higher grades. The majority of post-1964 Washington quarters are common and inexpensive, even in higher grades.