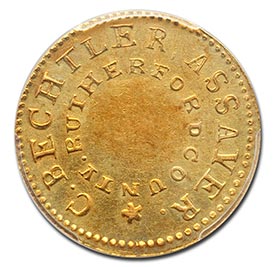 Territorial and private issues were common all the way through the Coinage Acts of 1857 and 1864, which banned private and foreign money from circulating alongside U.S.-minted currency. There were still private issues which circulated in Western states and territories like Utah and California even after this act. Some of these were certified by the U.S. government before official mints were put in place, while others only saw circulation for a limited period of time. The Bechtler family created several different private issues for Gold, which circulated widely in the Southeast.

Christopher Bechtler moved to Rutherford County, North Carolina from his home in Germany. Bechtler was assisted by his son August and his nephew Christopher. This area of the country was a hotbed for Gold, as the Piedmont area of North Carolina and Georgia was the primary source of the Precious Metal.

The Bechtler family produced Gold $1, $2.50 and $5 pieces. These pieces had a wide variety of weights and sizes, though. Many of these coins have rotated dies. Bechtler put the inscription “AUGUST 1, 1834” on several $5 varieties to avoid possible trouble with Treasury authorities.

Bechtler’s Gold dollars were the first Gold dollars created in the United States. These pieces were regularly circulated through the Southeast, though when the Coinage Act of 1834 passed and Gold went up many of these were melted.

Bechtler Gold coins are uncommon and expensive in even lower grades. There are a few variants that go for over a hundred thousand dollars in high grades. Many were melted in 1834 as the price of Gold went up, and more were melted in the mass repossession of Gold by Franklin D. Roosevelt. The North Carolina National Bank of Charlotte has one of the largest collections of these coins still in existence.