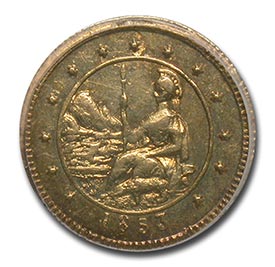 Territorial and private issues were common all the way through the Coinage Acts of 1857 and 1864, which banned private and foreign money from circulating alongside U.S.-minted currency. There were still private issues which circulated in Western states and territories like Utah and California even after this act. Some of these were certified by the U.S. government before official mints were put in place, while others only saw circulation for a limited period of time. California saw a number of private issues that saw varying degrees of circulation. Much of the Gold that people flocked to the state to mine found its way into local currency.

Many larger-denomination Gold coins were created by private mints, but there were also small denominations that circulated. Small-denomination Gold coins in quarter, half and dollar sizes were used to fill in the gaps in circulation when regular circulation was not possible for U.S. coins of that size. 1852 was the beginning of this. The Coinage Act of 1864 banned private coinage but it was not fully enforced till 1883, particularly in the Western states. Later tokens were made without denominations. Some were backdated. There are over 570 different varieties that have been identified.

These private issue fractional Gold coins were a symptom of the difficulties of commerce with the Western states. They occupy a unique space in the history of U.S. money.

Most of these tokens have a decent premium over their intrinsic value, but the most expensive of them generally tend to be a couple thousand dollars. There are a variety of counterfeits and modern imitations that have made the rounds as well. Any of these tokens created after 1883 are much less valuable.