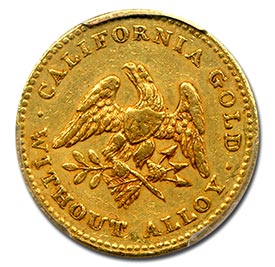 Territorial and private issues were common all the way through the Coinage Acts of 1857 and 1864, which banned private and foreign money from circulating alongside U.S.-minted currency. There were still private issues which circulated in Western states and territories like Utah and California even after this act. Some of these were certified by the U.S. government before official mints were put in place, while others only saw circulation for a limited period of time. California saw a number of private issues that saw varying degrees of circulation. Much of the Gold that people flocked to the state to mine found its way into local currency.

The Norris, Gregg & Norris issue of 1849 is considered the first of the California Gold coins. A newspaper account dated May 31, 1849 describes these as struck at Benicia City. The coin itself says San Francisco, although there is one unique coin in the Smithsonian collection that says Stockton. The private stamp of Norris, Gregg & Norris was not interpreted until 1902. These coins were created as an equivalent of the Half Eagle.

Moffat & Co. created private issues from 1849 to 1853, and were likely the most important private mint when looking back at the history of the state. Their assay office had official ties and the successor to the firm sold it to the Treasury Department, when it became the official San Francisco branch of the U.S. Mint. Moffat & Co. created small Gold ingots with denominations printed on them for a few years, with the $9.43, $14.25 and $16.00 being the only ingots known. They also created $5 and $10 pieces with the face of Liberty on the obverse and a heraldic eagle on the reverse.

Augustus Humbert worked with Moffat & Co. in his role as United States assayer. The assay office in California was a provisional government mint and Humbert placed his stamp of approval on the $50 ingot issued in 1851 and 1852. This piece had a heraldic eagle on the front and an octagonal shape.

In 1852, Moffat & Co. saw an opportunity to create their own $10 and $20 coins as competitors were discredited due to weight disparities in their coins. The $10 coin came in two variants, one with Liberty on the obverse and an eagle on the reverse, the other with Humbert’s name and authorization in place of Liberty. The $20 piece created that year had the latter design.

1852 saw Moffat & Co. dissolved and merged into a new company called the United States Assay Office of Gold. This company is also known as Curtis, Perry and Ward after the principals. Designs for the $10 and $20 coins and the $50 ingot continued with few changes. The last issue from Moffat was 1853, and the design is very similar to the Double Eagle of that period.

There are many smaller issues as well, created from 1849 through 1851. J.H. Bowie of San Francisco created an 1849 pattern coin in Copper and may have created Gold coins after that pattern, but the pattern is the only remnant we have. The Cincinnati Mining & Trading Company and the Massachusetts and California Company created their own Gold coins. The Miner’s Bank in San Francisco created a Gold/Copper alloy $10 coin but it did not catch on because of its intrinsic value being lower than its face value. J.S. Ormsby and the Pacific Company also created 1849 coins.

In 1850, F.D. Kohler was authorized to run the newly-created State Assay Office. Kohler’s name is stamped on many Gold ingots of the time period. Dubosq and Co. and Baldwin & Co. were companies that created Gold issues in 1850.

Kellogg & Co. was created by John G. Kellogg, a former employee of Moffat & Co. Kellogg combined with G.F. Richter in 1853 after the U.S. Assay office shut down. The branch mint for San Francisco was not up and running yet, and Kellogg and Co. decided to fill the vacuum in 1854 with a $20 piece. In 1855 the San Francisco mint was up and running but Kellogg and the newly reorganized company, now called Kellogg and Humbert due to its incorporation of Augustus Humbert, created even more $20 coins. A few presentation $50 pieces were also made that year but do not look to have circulated.

California private issue Gold coins were regularly circulated and filled the gaps in coinage that accompanied California’s status as a pioneer state. Many of the men involved in these companies would later go on to be involved in government work with the branch mint of San Francisco.

Almost all of these coins and ingots are rare and expensive, with many selling for hundreds of thousands of dollars. Some are entirely unique and cannot be priced effectively.