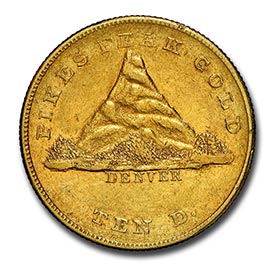 Territorial and private issues were common all the way through the Coinage Acts of 1857 and 1864, which banned private and foreign money from circulating alongside U.S.-minted currency. There were still private issues which circulated in Western states and territories like Utah and California even after this act. Some of these were certified by the U.S. government before official mints were put in place, while others only saw circulation for a limited period of time. Colorado saw several coins created by private mining concerns during the mid-1800s.

The Colorado Gold Rush came a decade after the California discovery of Gold at Sutter’s Mill, and it became the second biggest rush. Over 100,000 people flooded Colorado, gaining the name “Fifty-Niners” for the year in which they came. Many of the large cities in Colorado today were created in this Gold rush.

California had dealt with this problem before, and now Colorado was dealing with it. There was no infrastructure or monetary system prepared to deal with this kind of influx. Gold dust became the currency of choice, but disagreements over value caused conflict between shopkeepers and miners. The solution was local. Mining concerns and private mints stepped into the void, creating $2.50, $5, $10 and $20 coins.

Clark, Gruber and Co. was one that created all four types in 1860. These followed Eagle designs on the smaller coins but the $10 and $20 had Pikes Peak on the obverse.

John Parsons & Company was linked to the Tarryall mines, and there are a few 1861 coins known in $2.50 and $5 denominations.

These coins are unique, struck in small numbers and capture a unique moment in American history. They are a time capsule of the Colorado Gold Rush.