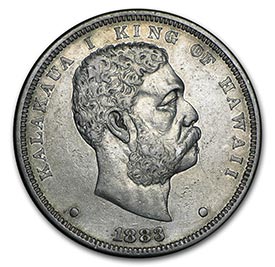 Hawaiian coins occupy a unique position in U.S. numismatic history, as they were struck at the San Francisco branch mint but were created before the islands became a territory. These coins were designed by famed U.S. coin designer Charles Barber.

Hawaii was a barter-based economy before the arrival of Captain Cook, and for a while it remained so. With missionaries and trade coming to the islands, people began using coins more. Plantations issued their own tokens, often denominating them in cents. But these tokens had some unique denominations, with many being denominated in 12 1/2 cents. This was due to the legacy of Spanish coinage and the famed “piece of eight” which formed the foundation for the American Silver dollar.

The first official Hawaiian coin was commissioned by King Kamehameha III in 1847. These cents did not see common circulation due to their small amount, and due to the failure of this coinage the government decided not to pursue any more plans for its own coins.

Most trade within Hawaii was denominated in dollars, and the government periodically published tables that gave equivalents for other foreign coins that were passed into circulation through foreign trade. The U.S. dollar was the default currency. Over time, American currency came to dominate trade on the island and Hawaii made American Gold legal tender in unlimited amounts and Silver legal tender up to $50. Hawaii issued its own currency notes in 1879, redeemable for Silver.

King Kalākaua became interested in a coin bearing his likeness after his world tour of 1881, and he appointed a coin proponent, finance chair Walter M. Gibson as head of the government. Gibson had pushed a currency law through the legislature in 1880 but the government did not act until 1882.

The Hawaiian government negotiated with the United States and contracted with them to create coins denominated in regular U.S. denominations, including five- and ten-cent piece, quarter dollars, half dollars and dollars. They also asked for an eighth dollar piece due to the popularity of the 12 1/2 cent plantation tokens, which were used for wages. This piece was cancelled but exists as a pattern.

Charles Barber was asked to create these pieces and did so, working out of Philadelphia. He sent dies to the San Francisco mint where the coins were to be created, and they began striking them in 1881.

All of these Hawaiian coins were struck from Silver. The obverse of these coins is a bust of Kalākaua. The reverse of the larger coins (dollar, half and quarter) have the royal arms on the reverse. The dollar also has the Star of the Order of Kamehameha with the royal crown above. The smaller coins have the denomination as the reverse with a crown and wreath.

Hawaiian coins did not see widespread acceptance at first, and the government had to take significant measures to prop up the money because it was struck during a recession. But as time went on the coins began to circulate and eventually drove out all non-U.S. money.

When the kingdom fell, the short-lived republic that followed was annexed by the United States. Legal tender status for the Hawaiian coins was revoked in 1900, though these coins still circulated through 1903 or 1904. Most were redeemed for U.S. Silver and melted at the San Francisco Mint, the place they were originally struck.

Hawaiian coins occupy a unique place in history because they were coins created by a sovereign kingdom, but struck by a neighboring power. They also have some significance because of Barber’s reputation as a coin designer.

Hawaiian coins are somewhat rare. Most of the million dollars originally minted were returned to the U.S. government, and more were lost in the Chinatown fires of 1887 and 1900 in Honolulu. The eighth dollar is the rarest, as it was a pattern that was never actually created for circulation. The 1883 dollar is also hard to find and expensive in higher grades.