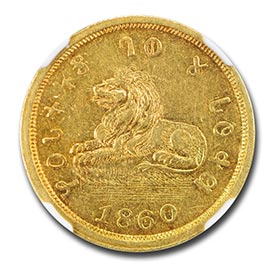 Territorial and private issues were common all the way through the Coinage Acts of 1857 and 1864, which banned private and foreign money from circulating alongside U.S.-minted currency. There were still private issues which circulated in Western states and territories like Utah and California even after this act. Some of these were certified by the U.S. government before official mints were put in place, while others only saw circulation for a limited period of time. Utah saw some private issues created when it was called the Mormon Territory. These were struck at the behest of the Church of Jesus Christ of Latter Day Saints, with Brigham Young personally supervising the mint.

Sutter’s Mill was the site of the first discovery of Gold in California. Members of the Mormon Battalion who had fought in the Mexican-American War settled around there and were working for foreman James Marshall at the time. They helped Marshall with his Gold strike in 1848, and a couple of months later they created and settled their own mining town called Mormon Island. Gold was found in this area as well and it was sent back to Utah.

The Church of Jesus Christ of Latter Day Saints ran the Mormon Territory, at the time called the “State of Deseret”. They saw a need for coins in their territory, and Brigham Young and high-ranking church officials John Taylor and John Kay personally created the dies and supervised the striking of new coins. Known examples are dated 1849, 1850 and 1860. Minting actually began in December 1848.

These coins were created at a unique time in American history. The Mormon $20 coin beat out the Double Eagle as the first $20 coin by about a year, making it an interesting historical precedent.

These coins are expensive even in low grades, with the lowest going for tens of thousands of dollars and the highest going for multiple hundreds of thousands of dollars. Only about 4,000 of these were made, and they were underweight due to the mint operators’ inexperience. Many of these were later melted down. Surviving examples are extremely rare.