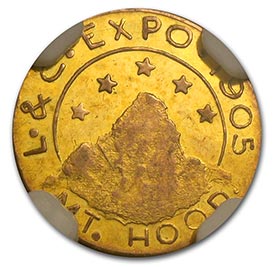 Territorial and private issues were common all the way through the Coinage Acts of 1857 and 1864, which banned private and foreign money from circulating alongside U.S.-minted currency. There were still private issues which circulated in Western states and territories like Utah and California even after this act. Some of these were certified by the U.S. government before official mints were put in place, while others only saw circulation for a limited period of time. Oregon saw some private issues created due to the return of miners who had traveled to California for the Gold Rush.

Many Oregonians traveled to California to find Gold when the Gold Rush occurred, and as they returned home they brought Gold dust. Tradespeople were annoyed dealing with Gold dust as a medium of exchange. Gold was of variable quality and assay and weighing the dust rapidly led to frustration. The citizens petitioned for a new Gold coin.

The territorial legislature passed a resolution for a mint to create pure $5 and $10 Gold coins on February 16, 1849. Oregon had just been added to the United States as a territory, and when the governor arrived at the start of March he swiftly moved against the coinage act. He declared it unconstitutional.

This did not deter the Oregonians, though. Eight men created the Oregon Exchange Company and struck $5 and $10 coins in Oregon City according to the original specifications. All known examples are dated 1849. These are sometimes called “Beaver coins” because of their design, which had a beaver on the obverse.

These Gold private issues are unique, as they were only possible in a very narrow window when Oregon had just become a territory.