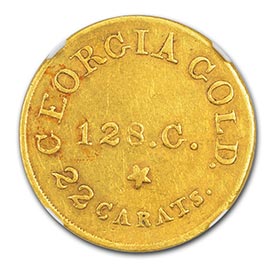 Territorial and private issues were common all the way through the Coinage Acts of 1857 and 1864, which banned private and foreign money from circulating alongside U.S.-minted currency. There were still private issues which circulated in Western states and territories like Utah and California even after this act. Some of these were certified by the U.S. government before official mints were put in place, while others only saw circulation for a limited period of time. The Templeton Reid coins were created before the ban and have the distinction of being the first private Gold issued in the United States in the 19th century.

Templeton Reid began his work in the 1830s, in his hometown of Milledgeville, Georgia. Reid was a gunsmith and a jeweler. Eventually he began creating his own coins, and most of them were created in Gainesville, where he moved to be closer to the Georgian Gold mines. Reid’s coins were weighed accurately, but he did not correctly assay the Gold used and the intrinsic value did not match the face value. Reid was savaged by the press and closed his mint after only 4 months. The coins were created in $2.50, $5 and $10 denominations and only about 1,600 are known.

There are also some later pieces marked CALIFORNIA that were struck in 1849. Reid created a $10 and $25 coin, likely in very small numbers. Reid died two years later. He had not been to California, so the mark is likely referring to the Gold coming from California.

Reid’s Gold pieces were the first Gold private issues created in the 19th century. Ephraim Brasher’s Gold doubloons were private U.S. Gold issues, but they were created during the 18th.

The Templeton Reid pieces are extremely expensive, with the small $2.50 pieces going for well over a hundred thousand dollars in low grades. The high grades of the no-date $10 piece go for over a million dollars.