Silver Vs Platinum Vs Palladium - How To Tell The Difference 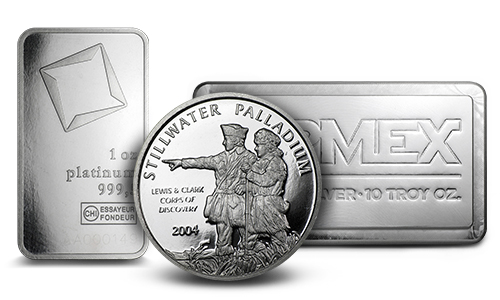 To the untrained eye, some Precious Metals may be hard to identify. Intuitively, we have a general idea of what Precious Metals look like, but we may not have looked deeply enough to identify the nuances that make the metals what they are. Silver, Platinum, and Palladium all share a similar color, but being able to tell the differences between the three can help you understand whether you are buying genuine items or not.

This skill will likely be more helpful to you if you're purchasing Platinum or Silver Jewelry, as these are often purchased from someone other than the manufacturer. But even so, it's a valuable skill for both the bullion investor as well as the numismatic collector to have as well. Whether you buy Silver, Platinum or Palladium at a store or online, it is important to know how to tell the differences between these three Precious Metals.

THE BASICS OF SILVER, PLATINUM, AND PALLADIUM
In order to be able to tell the differences between these three Precious Metals, it helps to understand the basic features of each.

Even though these metals may have a difficult time passing the visual test, buyers can determine the differences between the three metals with a little help.

DETERMINING THE DIFFERENCES BETWEEN SILVER, PLATINUM, AND PALLADIUM
Silver stands out because it is the most common metal. Since it is the most susceptible to scratches and corrosion, seeing signs of these flaws is a good indication that it is Silver or a combination of different metals.

WHAT ARE THE CHARACTERISTICS OF REAL PLATINUM?
Other than a whiter and brighter appearance, not much differentiates the physical look of Platinum from Palladium or Silver. Platinum is highly resistant to scratches and corrosion. Buyers can also tell the differences in their density. Silver and Platinum have different densities, and if you calculate the weight as well as the water displacement of your article of jewelry, you’ll be able to calculate an equation that gives you a rough estimate of how much Platinum is present. Platinum will be approximately 18 grams/cc, while Silver is lighter at approximately 10 grams/cc.

WEIGHT, NOT COLOR OF PALLADIUM
For Palladium, the key comes with the weight and not the color. Palladium is about half the weight of Platinum.

The eye test may not be enough to determine the differences between Silver, Platinum and Palladium, but knowing the density and having a little basic knowledge of the three Precious Metals can help you better identify each one.