How Much Gold and Silver Are in an Olympic Medal? 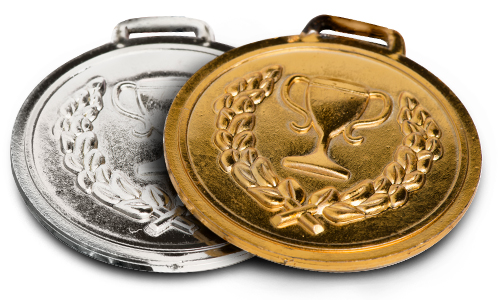 Every four years, the world's best athletes converge at a single destination to determine who is the best in the world. The ancient Olympics first occurred in 776 B.C. in Olympia, Greece, and lasted until A.D. 393 before taking a long hiatus. Their rebirth took place in 1896 in Athens, Greece.

Today, the goal of an Olympic athlete is to achieve the moniker as the best in the world in their event. The Olympic Gold medal is the crowning achievement for that honor, followed by the Silver medal and the Bronze medal. But exactly how much Gold or Silver is in an Olympic medal?

While many equate the success of being the best athlete in the world as worthy of a pure Gold medal, it is not so today. There was a time when the best athletes did receive a solid Gold medal, the latest being the 1912 Stockholm Games. Today, however, is a different story. Olympic medals are not solid Gold medals or Silver medals; rather, they contain a blend of Gold and Silver or Copper and Silver. "The composition and design of the Olympics medals are determined by the host city's organizing committee. However, certain standards must be maintained:

Other metals contained in an Olympic Gold medal are Copper, Zinc and Tin. Silver medals are a modification of the Gold medal. The Gold is replaced with more Copper...the Bronze medal is made of 7% copper, 2.5% Zinc and 0.5% Tin.

HOW MUCH IS A GOLD OR SILVER MEDAL WORTH?
The Olympic committee of each host city determines the final Gold and Silver content in a medal. Some host locations offer significantly more metal content than others, but sourcing and economic factors in each country means the content may vary greatly. A Gold medal contains 6 grams of Gold at a minimum but that does not negate the fact there is still monetary value in the medal.

While there is actual Gold content in an Olympic Gold medal, and Silver content in an Olympic Silver medal, you can see the current approximate worth of 6 grams of Gold with this conversion table. The notoriety of an Olympic medal far outweighs its financial value, even though that may be counter to our perception of what it means to be the best in the world. One reason the Olympic Committee has never seen fit to change the composition of a Gold medal is to ward off souvenir hunters and those who would cheapen the experience of the Olympics.

Gold, Silver and Bronze medals do have exponential value associated with them and can be sold or traded at higher prices simply by virtue of being an Olympic medal, not a Gold coin or Silver coin. Collector value and intrinsic value are two separate, but important, things.

ARE OLYMPIC MEDALS MORE SYMBOLIC THAN MONETARILY VALUABLE?
Of course, the value of an Olympic medal lies more in its symbolism, but there is much to be said about what it means to be the best in the world and participate in an event that happens only once every four years. The Olympics is a marquee event for many athletes. It is the pinnacle of their athletic career and it garners, in many cases, a lifetime of notoriety. The Olympics is something only the best of the best participate in, making it the world's most diverse and competitive sporting event. Pierre de Coubertin, founder of the International Olympic Committee and father of the modern Olympic Games, penned these words as the Olympic Creed in 1908: "The most important thing in the Olympic Games is not to win but to take part. Just as the most important thing in life is not the triumph but the struggle. The essential thing is not to have conquered but to have fought well."