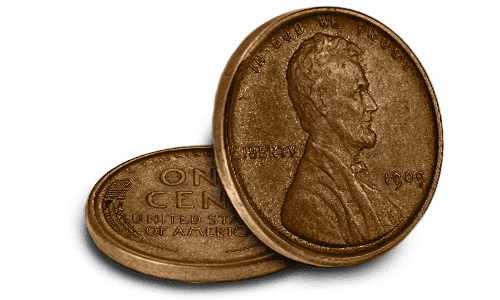 To non-collectors, "1909-S VDB" is just a bunch of jumbled letters after a date. But to a coin collector, this coin is the holy grail of Lincoln Cents. It is the key date and the most coveted of all non-error Lincoln Cents. So, what makes this coin so special?

To celebrate the 100th anniversary of Abraham Lincoln's birth, 1909 marked the first year the Lincoln Cent was struck. Prior to the Lincoln Cent, the Indian Head Cent was minted between 1859 and 1909. As President Theodore Roosevelt’s term was coming to an end, he engaged noted sculptor Augustus Saint-Gaudens to submit designs for the cent and the four Gold coins minted at the time ($2.50, $5, $10 and $20). Saint-Gaudens worked tirelessly on perfecting his proposed designs. While two of his Gold coin designs were ultimately accepted, he never had an opportunity to submit a design for the cent as he died in August 1907.

Design of the Lincoln Cent

Engraver Victor David Brenner was selected by President Roosevelt to submit designs for this important coin. It would be the very first time a United States President would be depicted upon the nation’s coinage. Roosevelt loved the design and into production it went.

When Brenner designed the coin, his full name was placed in small letters at the bottom of the reverse. It is typical for most designers to place their name, or at least their initials on coins they designed. U.S. Mint Chief Engraver Charles Barber saw Brenner's name and changed it to his three initials. Barber himself had created designs for the then-current Dime, Quarter and Half Dollar and his only recognition was the single letter "B" at the base of the neck on Lady Liberty on all those coins.

When the newspapers ran stories about the new Lincoln Cent about to be struck, uproar occurred because of Brenner's initials "VDB" were placed prominently on the reverse. Some competitors and many members of the public felt the initials were too conspicuous and it gave too much publicity to the designer. A mint employee then removed the "VDB" from the coin, after thousands were struck, creating yet another variety of 1909-S Lincoln Cent.

The first Lincoln cent, the 1909 coin struck in Philadelphia, struck with the designer's initials prominently on the reverse was produced in large quantities - 27,995,000 coins were struck in Philadelphia alone. The dies also went to the U.S. Mint at San Francisco where, due to the dies arriving late in the year, only 484,000 coins were minted. This is the lowest mintage of any regular issue Lincoln Cent – a record that still stands more than 105 years later!

Whether it is the controversy about the initials or the fact that only 484,000 were struck in comparison to more than 27 million coins for the Philadelphia coin, the "09-S VDB" is likely the most popular and most well-known of all Lincoln Cents. Its popularity has withstood the test of time for more than 100 years and its enduring popularity is a testament to the beautiful Brenner design and the low mintage!