What Is a Niobium Coin? 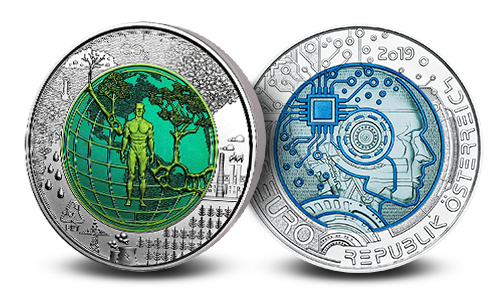 Niobium, previously known in the U.S. as columbium, is a chemical element under the symbol Nb with the atomic number 41. Niobium is a soft, whitish, ductile, transition metal often found in the minerals pyrochlore and columbite.

The name niobium comes from Greek mythology. Niobe is the daughter of Tantalus, after whom tantalum is named. This pairing reflects the tremendous similarity between the two elements in both their physical and chemical properties. It is difficult to tell them apart except in a laboratory setting.

Niobium is extremely useful as an alloy. As little as 0.1% niobium can increase the strength of steel. The more niobium in an alloy, the stronger it is, and certain niobium alloys are used to craft jet engine parts. Niobium is also a superconductor and has applications in the medical and science areas. MRI machines and the Large Hadron Collider, for example, both need niobium elements to function. This lesser-known metal is a very important part of our everyday lives although many people are not even aware of its existence.

The Austrian Mint is one of the world’s oldest and most respected mints, with roots reaching back to 1194. The Austrian Mint as we know it dates to 1918 when the Republic of Austria came into being. The beloved and iconic Philharmonic Silver and Gold coins by the Austrian Mint are among the world’s most widely traded bullion coins and make the mint famous to numismatists. In 2003, the mint issued a 25 Euro coin featuring an outer ring of Silver encircling an inner disc of niobium. There has been a niobium coin issued each year since and this is now the Austrian Mint's best-known collector series.

Niobium coins honor Austrian, European and global advances in science and technology. This fascinating and innovative series represents the first use of niobium, a metal rarer than Silver, in a numismatic series.