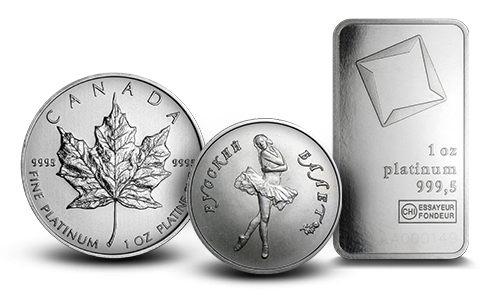 Platinum and Palladium have been known since 1735 and 1802, respectively, but have only broken into the mainstream Precious Metals scene relatively recently. If you’re interested in expanding your investments to include either of these rare metals, you’ll want to learn more about them and their growth potential. Whether you’re a first-time buyer or an experienced investor, these quick facts can help you decide if Platinum or Palladium is right for you.

Platinum is a white Precious Metal used in everything from high-end jewelry to catalytic converters, but it wasn’t always considered either precious or useful. During the 17th century, traces amounts of Platinum were found in South American Gold mines, and the Spanish miners generally considered the white metal an annoyance. Now, those in the know about Precious Metals know that Platinum is both extremely valuable and extremely rare. Much rarer, in fact, than the Gold the conquistadors were after centuries ago.

Almost half of the annual Platinum production goes directly to the automotive industry to help control vehicle emissions. Platinum is likely the catalyst in the ignition of hydrogen in your car’s catalytic converter. Also using lots of Platinum right now is the fine jewelry industry. High-end jewelry accounts for about a third of the Platinum mined each year. Other, less well-known applications for Platinum include medical machinery electrodes, used in turbine engines, and of course, Precious Metal investment products.

Palladium is a Silver-white Precious Metal of ultimate value, due to its high demand for use in numerous industries, such as dentistry, groundwater treatment and jewelry. Palladium also has a high value-to-density ratio, as well as increasing demand and value for the rare Precious Metal.

Like all Precious Metals, Palladium prices fluctuate all the time, so there is no set price. However, being that Palladium is utilized in so many different industries, the demand is constantly rising. As Palladium is largely used in major industries, such as the automotive industry, the change in value is directly impacted by the events of those individual industries.

How are These Metals Different?

Platinum and Palladium are almost identical. Their similar elemental makeup means they act as catalysts to the same chemicals and elements and, when used in personal accessories, maintain a bright white color and do not tarnish over time. The difference between these two exceptional and exceptionally beautiful metals comes down to density and cost.

Platinum is much denser than Palladium. It is a heavier, more durable metal than either Silver or Gold and is often used for wedding or engagement rings due to its enduring strength.

Platinum and Palladium both have applications in the automotive industry, in medical equipment, and in fine jewelry. Platinum is also used in dentistry, as surgical instruments and electrical contacts, as well as in the production of exceptionally strong magnets. Palladium is an essential component of white Gold, is used in dental equipment, and is used in the works of high-end watches.

The scarcity of Platinum and Palladium combined with the growing demands enjoyed by both metals makes for an exciting potential return on investment for these Precious Metals. As an example, Gold mining ceased today, worldwide, the Gold we have on hand would last for about twenty-five years. However, if Platinum mining was suspended right this minute, the supply would meet demand for about one year.

Because of their important industrial applications, aesthetic allure, and investment potential, you would think that Platinum and Palladium would be unavailable and hard to get, but it’s not difficult to find. Platinum and Palladium, while they are gorgeous Precious Metals with real potential as investment products, simply don’t enjoy the same popularity as Gold and Silver. Also, due to the relatively tiny supply, the prices of these metals tend toward volatility, making them less than ideal for casual investors.

Platinum and Palladium bullion are commonly available in the form of bars and rounds, and occasionally in a real coin. These high-quality items feature lovely artwork, allowing you to enjoy your investment as you build and diversify your investment portfolio.

Whether you’ve been considering branching into Platinum or Palladium investment products for some time, or we are just now piquing your interest, you can feel confident that your transaction with APMEX will be smooth and simple, and your satisfaction is guaranteed.