U.S. Mint Director Robert Patterson hired John Reich, a German immigrant, in March of 1807. Reich had been seeking employment at the Mint since 1801, having arrived in Philadelphia just a year earlier. Reich worked as an Assistant to Chief Engraver Robert Scot. He designed the “Capped Bust” coinage, first appearing on Half Dollars in 1807 and later on the Dime in 1809.

By 1817, Reich had worked for the U.S. Mint for over a decade. He had received neither any recognition for his services nor a raise. Acting on his frustration, he resigned. His design lived on for another twenty years.

It was not until 1820 that Capped Bust Dimes were again struck. The Mint struck 942,587 coins and struck them in all three varieties as previous – large 0, small 0 varieties and a “STATESOFAMERICA” variety. Over 1 million coins were struck dated 1821 and these were split between a large and small date variety. But only 200,000 1822-dated coins were struck, so all of them are rare in any grade. 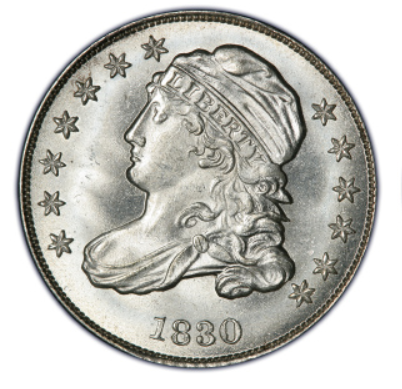 Replacing the Draped Bust Dime, Reich’s design portrays Miss Liberty facing left, wearing a Phrygian cap with LIBERTY emblazoned across the headband. Below Miss Liberty is the date, surrounded by 13 stars – 7 to the left and 6 to the right. The reverse features a version of the Heraldic Eagle perched on a branch while holding three arrows, a shield on its breast and E PLURIBUS UNUM on a scroll above. The denomination “10 C.” is at the bottom of the coin.

No Capped Bust Dimes were again struck until 1814. Of the 421,500 coins minted, there were three varieties: a large date, a small date, and a small variety with the words “STATESOFAMERICA” pushed together as one word. 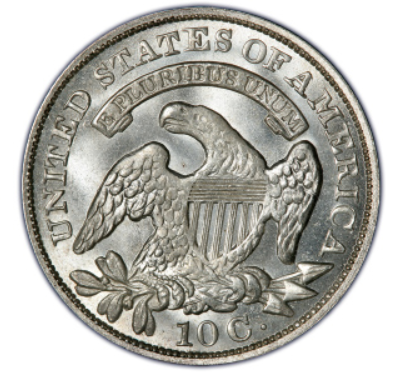