Due to the rise in the price of Silver, the Silver fineness remained the same at .8924, but the size of the coin changed from the earlier Draped Bust Half Dime coins (1794 – 1805). The diameter shrunk by 1 millimeter - from 16.5 mm to 15.5 mm. Most people could not notice that difference, but they did notice that the designs had changed on both sides. The Draped Bust Miss Liberty, facing right, was gone, and replaced by another version of Miss Liberty. 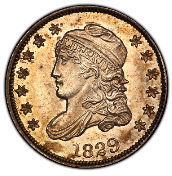 This Miss Liberty looked a little different than the previous version. The design featured her hair down, but most of it was covered, as it was inside of her Phrygian cap. The cap, as before, featured the word “LIBERTY” emblazoned across the brow. She faced left, instead of right, but she was still surrounded by 13 stars and featured the date below her.

The reverse also was changed completely. Instead of the Heraldic Eagle, the new American eagle design featured down-spread wings, a Union shield across her midsection, arrows, and olive branches below and a banner above her with “E PLURIBUS UNUM” on it. The design encircled by “UNITED STATES OF AMERICA” above and the denomination expressed as 5 C. at the bottom of the coin. These designs are actually updated versions of John Reich’s Capped Bust design on the 1807 Half Dollar. 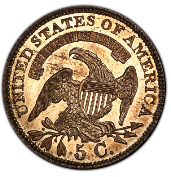