In 1800, John Reich came to America from Germany and applied for a job at the U.S. Mint. After being recommended for employment by President Thomas Jefferson in 1801, he was hired. For several years, he did small re-engravings or other minor work. In 1807 he was given the task of creating completely new designs. He designed the “Capped Bust” coinage, first appearing on Half Dollars in 1807 and later on the Dime in 1809. The design didn’t make its way to the Quarter Dollar until 1815, as no quarters were struck between 1808 and 1814.

Early quarters fell victim to Gresham’s Law. This is a monetary principle maintaining that "bad money drives out good." It is mainly used for consideration and application in currency markets. Gresham’s Law was originally based on the composition of minted coins and the value of the Precious Metals used in them. 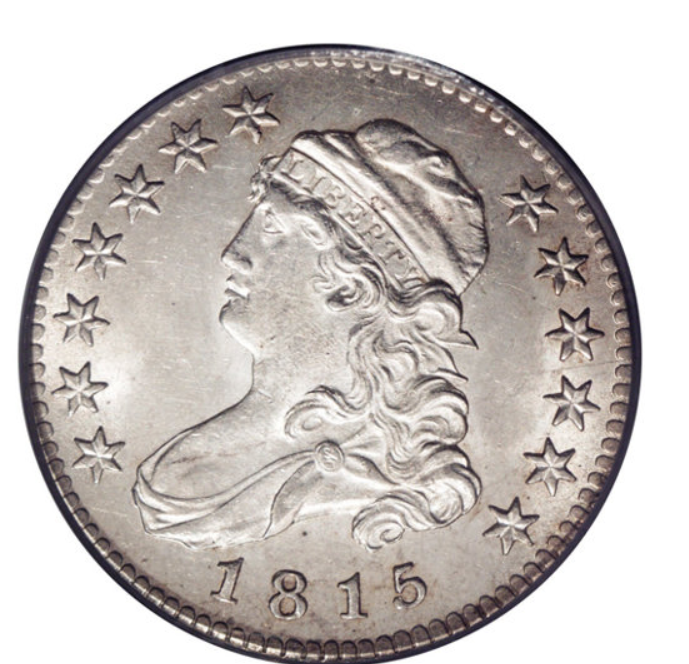 Reich’s design portrays Miss Liberty facing left, wearing a Phrygian cap with LIBERTY emblazoned across the headband. Below Miss Liberty is the date, surrounded by 13 stars – 7 to the left and 6 to the right. The reverse features a version of the Heraldic Eagle perched on a branch while holding three arrows, a shield on its breast, and E PLURIBUS UNUM on a scroll above. The denomination “25 C.” is at the bottom of the coin.

The 1823/2 Capped Bust Quarter only had one major variety, which happened to be an overdate error. All quarters of this year had an 1823 date struck over the 1822 date. This is an extremely rare and valuable year, with a limited mintage of 17,800.

There are certain Large Size Capped Bust quarters shrouded with mystery. Mostly dated 1815 and 1825, some coins have a large “E” or “L” counter stamped above Liberty’s head. These marks are unmentioned in official records and purpose unknown. Though nothing has been confirmed, it is speculated that they could have been made to use as school prizes. 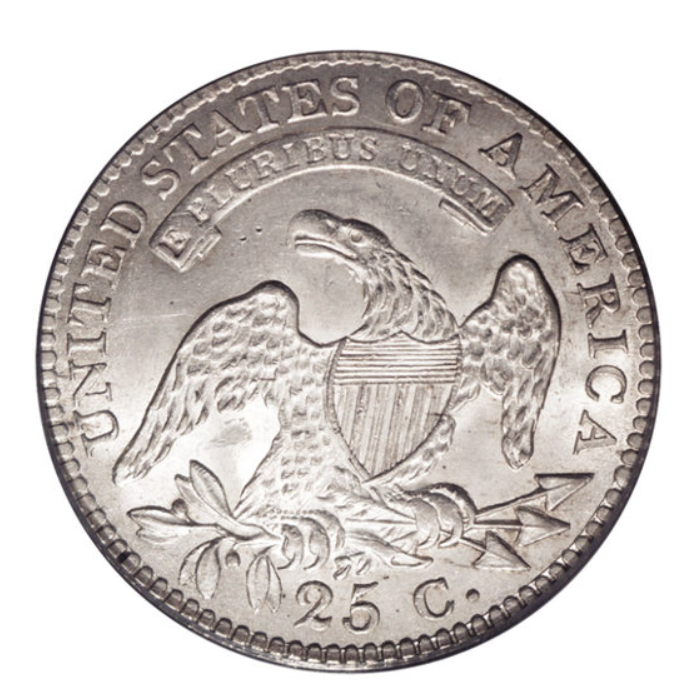 Coins struck between 1815 to 1828 are called Large Size Capped Bust Quarters, because they measured 27 millimeters in diameter. In 1829, construction began on the new Philadelphia Mint building. Engravers and designers had more space and time for renovations to the coin designs. During this time, William Kneass modified the Capped Bust Quarter design. The redesigned Reduced Diameter Capped Bust Quarter was smaller, measuring only 24.3 millimeters in diameter. Kneass kept Reich’s basic design, but he altered Miss Liberty’s appearance, making her appear more youthful. He also removed the banner with E PLURIBUS UNUM above the eagle on the reverse. This design was used from 1831 to 1838.

In 1829, several mechanical improvements were made in the striking of half dimes, but it would not be until 1831 that these same procedures could be used to produce quarters. The new procedure, known as the “close collar” implemented what Mint Director Samuel Moore called a “mathematical equality” to the quarters. A higher, beaded border was also incorporated around the rims, which served to protect the interior surface of the coin.