Numismatic Coins Vs. Old Currency: Where Value is Determined 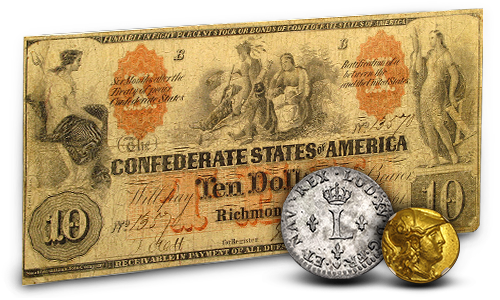 The differences in numismatic coins and rounds versus old currency are a matter of historical, intrinsic, and monetary value. Before investigating which is more valuable, here are some highlights of numismatic coins versus currency that are important to know.

The quantity produced is significantly higher than currency. Even though currency was easier and cheaper to produce, the abundance of Gold, Silver and other Precious Metals makes it easier to produce larger quantities. Speaking historically and in modern terms, there is notoriety for someone who owns Precious Metals.

Currency has an interesting history. There are plenty of examples of paper currency that have existed as long as coins have; however, currency was not as widely circulated or collected as coins and rounds. Currency slowly started becoming an important part of monetary circulation. During the Civil War, Confederate Currency was produced to help support the war because Precious Metals stores were hoarded.

The Civil War saw the beginnings of regular circulation with paper currency. Federal Reserve Notes and Bank Notes became more common following the war. In terms of value, one should consider a few factors regarding finding value in numismatic coins or currency:

While it may seem that numismatic coins offer more value, there is some valuation in currency too. While currency has changed many forms over the years from Confederate Currency to Large Federal Reserve Notes, currency items complement any numismatic collection today. Value exists in all forms of currency, new or rare.