What are Gold Doubloons? 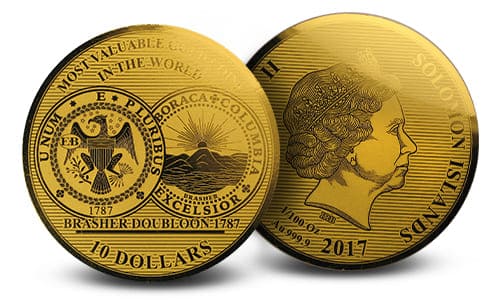 Gold doubloons are usually 16th or 17th century Spanish Gold coins that are often associated with sunken pirate ships or treasure found hidden in caves. The word “doubloon” originated from the Spanish word for “double.” The Spanish used them as currency from the mid-16th century to the mid-19th century. The typical weights of a doubloon, because there was no advanced minting technology, were anywhere between 6 grams to 8 grams. The Gold pieces were typically made from 22 karat Gold. Many higher denominations of these coins were minted to be heavier. They were mostly round in shape, but they were hand-stamped often causing a rectangular of irregular shape.

While these coins were prevalent from the 16th to 19th centuries in the Spanish colonies, their popularity extended to other parts of the world including Europe and the Americas.

The Weight of A Gold Doubloon

The most familiar coinage weight system we are accustomed to are ounces or grams. Conversions of the weights are important to understanding our metric system of Precious Metals. To understand the weight of the Gold doubloons, it is important to understand the Spanish weight system. Much like the ounce or gram system, the Spanish had a weight system in the form of reales and escudos. Reales were used for Silver coins while Escudos were used for Gold coins. These Doubloon Gold coins were issued in Escudos until approximately 1833. The common denominations were 1/2, 1, 2, 4 and 8 Escudos. Four Escudo coins are commonly known as the doubloon and eight escudos is a double.

Though these special bullion pieces were primarily minted in the Spanish colonies their value remains high today. Spanish and Portuguese Gold doubloons are scarce today; any available today are worth collecting or investing. Some other Doubloon Gold Coins were made in other parts of the Spanish-speaking world shortly after Spain stopped striking them, and they were popular because of their familiarity, Gold content and numismatic history.