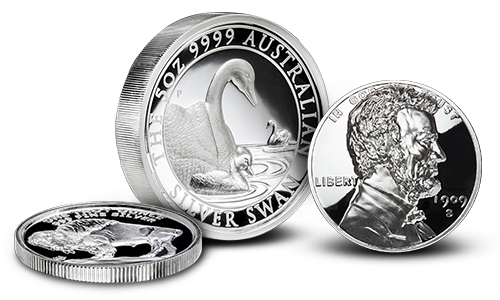 THE HISTORY BEHIND HIGH RELIEF AND ULTRA HIGH RELIEF COINS
Coins of ancient Greece are among the most coveted by collectors. Part of the appeal is the coin’s unique high relief effect where the image rises higher than the edge of the coin. This effect was originally the result of the coins being struck by hand, with a special emphasis on their artistic quality. Fortunately for collectors, this high relief effect helped these coins retain their beauty for ages.

Over time, as minting methods gained sophistication, machine minting allowed for more uniform coin designs and for bullion that could be easily stacked and efficiently stored. Nonetheless, high relief coins maintained their appeal.

President Theodore Roosevelt was an outspoken admirer of the high relief effect and sought to incorporate the method into modern minting. He wrote to the treasury secretary in 1904. Roosevelt wanted new designs that harked back to the high-relief Hellenic masterpieces but also captured the spirit of a nation growing in stature around the world.

THE FIRST EVER ULTRA HIGH RELIEF DOUBLE EAGLE COIN
President Roosevelt initiated production of the first Ultra High Relief Double Eagle, designed by Augustus Saint-Gaudens, in 1907. However, due to difficulty in striking, fewer than 25 of these coins were produced. Each coin required nine strikes from a hydraulic press, making mass production practically impossible. The U.S. Mint would go on to produce other high relief coins, including the 1921 Silver Peace Dollar. However, even these coins were so hard on the dies that the mint switched to a much lower relief in 1922.

HIGH RELIEF COINS AND ULTRA HIGH RELIEF COINS FOR THE MODERN DAY
It was not until 2009 that the U.S. Mint released a throwback to ultra-high relief design. The mass production of the 2009 Ultra High Relief Double Eagle in .9999 fine Gold was a marvel of modern engineering.

Through 21st century technology and the vision of Director Ed Moy, original Saint-Gaudens coin plasters were digitally mapped by the U.S. Mint. Using the digital design and die-making process, the Saint-Gaudens sculpture —in ultra high relief— has been updated to reflect the year 2009, an additional four stars to represent the current 50 states, and the inscription "In God We Trust," which was not on the 1907 version.

In 2015, the U.S. Mint again embraced high relief coin design and released the American Liberty High Relief Gold Coin, known as the Liberty Coin. Two advisory groups, including the 11-member Citizens Coinage Advisory and seven-member U.S. Commission of Fine Arts, worked together to bring this modern depiction of Lady Liberty to fruition. The coin’s $100 face value is the highest denomination ever used on a U.S. Mint Gold coin.