What is a Rimless Design Coin? 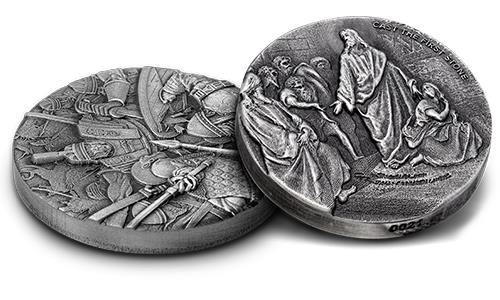 A coin’s design is generally confined to its rim, like a wall that holds the images of people, animals, structures in place. At least, this is the traditional view of coin design. In recent years, coin designers have pushed the boundaries until the coins’ boundaries have seemingly disappeared.

IDENTIFYING A RIMLESS DESIGN COIN
On a rimless design coin, images will bleed off the edge of the coin. For the observer, the effect is like that of looking through binoculars. The viewer is peeking-in on a scene that seems to exist independent of the coin. This design is in stark contrast to traditional coin design, where all images fit neatly within the rim, like a basket of collected objects.

For example, consider the 2 oz Silver Biblical Series coin depicting David and Goliath. The reverse shows David hoisting Goliath’s head above his own. Most of Goliath’s body is shown but his shield and staff trail off the edge of the coin. Likewise, soldiers on either side fade into the horizon with no clear end. The design feels like a piece of artwork, as is intended. This design is inspired by Gustave Doré's illustration of David and Goliath, which is pictured on the coin’s certificate of authenticity.