What is an Ancient Coin? 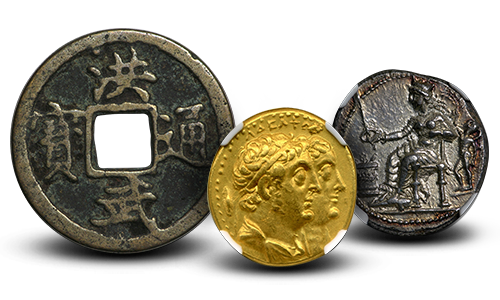 The term ancient is simply a loose generalization applied to very old coins, from civilizations that are no longer in existence. Some examples are ancient Sumerian, Babylonian, Greek, Roman, and Egyptian coins. This can be a useful starting point for anyone interested in trading and collecting coins of a different era.

The first step toward calculating ancient coin values is to accurately identify your ancient rare coins. Closely examine the coin for legends, including its ruler or a famous general from a particular civilization’s history. There is likely no country of origin, date, mintmark or denomination. Does the coin include any designs, like the face of a prominent individual or animal? What type of Precious Metal appears most prominent in the coin: Silver, Gold, Copper or Bronze? Use the Internet to search for information about the coin or consult an ancient coin expert.

New coin collectors may be surprised to learn that age does not necessarily guarantee a high premium for a coin. For example, the Bronze drachm coins from between 35 B.C. and 5 A.D, from the reign of Azes II, the king of Bactria in present-day Afghanistan are appreciated but also relatively inexpensive, at less than $15 per coin. In contrast, an ancient Silver Macedonian Alexander III tetradrachm, from between 336 and 323 B.C., is estimated at roughly $2,500 per coin. The Precious Metals content is of a small portion of the coin’s value. But the condition must be taken into account when estimating the value of older coins.