What Is My Old Coin Worth?

Coins have been around for more than 5,000 years. Early Roman Emperors gave Silver coins that featured their likenesses to their best generals and troops as a reward for bravery. Coin collecting became popular in Europe in the 1500s. In the United States, collecting coins didn’t really begin until the 1850s but by 1950s, it was one of the most popular hobbies. Many children and parents amassed nice collections working on them and enjoying them for years. 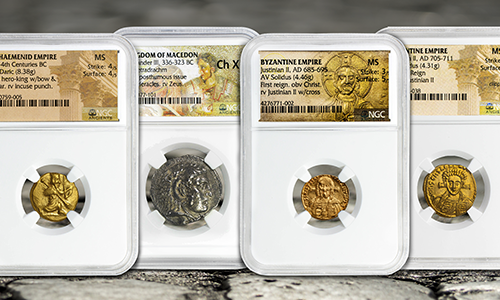 There are a variety of reasons one coin may have higher collector value than another. How can you determine whether the coins you have are valuable or not? Let’s discuss the factors that affect value:

Below we break down each of these factors to help you better understand your coin's value. 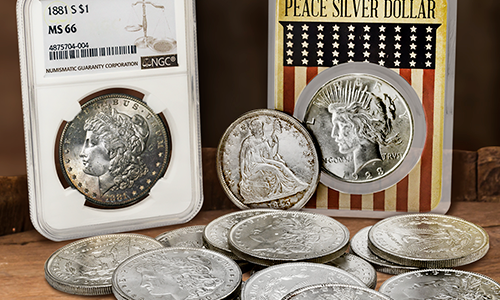 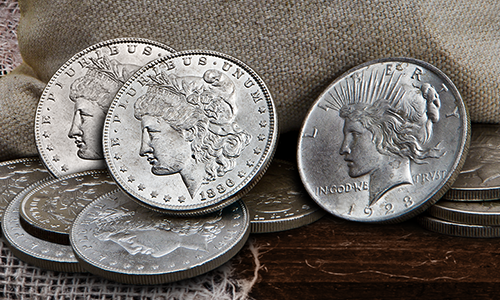 The Elimination of Silver from our Coinage

U.S. Silver coins, in different denominations, have been minted since 1794. The U.S. Silver coins vary from 3 Cent Silvers to half dimes, dimes, quarters, half dollars and dollars. All of these coins have varying amounts of 90% Silver. The earliest varieties of Silver coins beginning in 1794 have a Silver fineness of .8924. This was upgraded to .900 Fine in 1837 and that remained unchanged until 1965. Starting in 1959, there were significant coin shortages across the United States. The 1960s saw an unprecedented increase in the industrial use of Silver.

This put significant pressure on the price of Silver, which was capped at $1.29 per ounce by U.S. government sales. The Silver content in a dollar’s worth of coins was suddenly worth more as Silver bullion than as actual coinage. The price of Silver coinage increased to $1.40 per $1 face value of 90% Silver coins. As the public realized this, there was widespread hoarding of Silver coins. The price of Silver had risen and was exceeded by its melt value. At that point the Treasury decided they would no longer make Silver Dimes or Quarters. The Half Dollar coins would continue to have Silver but instead of a 90% Silver content, it was reduced to 40%.The clad coinage era had begun.

The Coinage Act of 1965 eliminated Silver from circulating coinage as described above. The 40% Silver in the half dollar was subsequently eliminated by a 1970 coinage law. Also placing pressure on Silver coinage was the demand for the 1964 Kennedy Half Dollar, honoring the recently martyred president. As coins were released, they were pulled from circulation. 90% Silver coins circulated with their new clad counterparts until all Silver coins had been withdrawn. 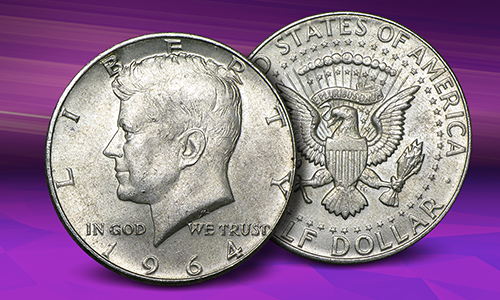 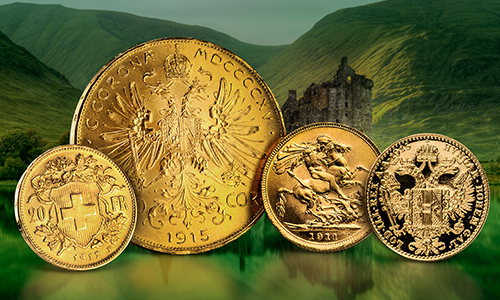 Gold in our Coinage

Gold has served as a form of currency throughout recorded history. With the discovery and settling of America, many foreign Gold coins served as currency for the as-yet-unborn country. Gold coins from Great Britain, the Netherlands, Germany, France and Spain dominated the U.S. economy. These foreign Gold (and Silver) coins were legal tender in the United States until 1857. United States Gold coins have been struck from 1795 until 1933, the year the Gold Standard was abandoned by President Franklin Roosevelt. That is why U.S. Gold coins from this time are referred to as Pre-33 Gold coins. 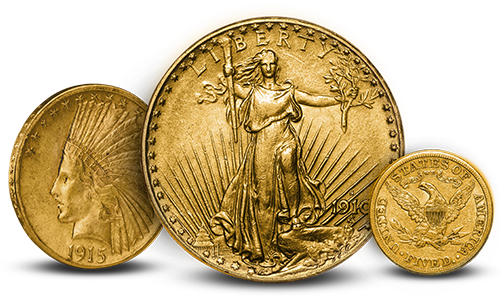 Here is a table of the major types of U.S. coins, along with an estimate of their value at two different conditions. This table is for informational purposes only and should not be used as a guide when looking to buy or sell any U.S. coins.

Large Cents are very widely collected in America. They are the link to our Founding Fathers and represent a beautiful series of coins. An important issue is the 1793 Large Cent, one of the first coins struck by the U.S. Mint. This coin comes in three types: the “Chain” Cent, the “Wreath” Cent and the “Liberty Cap” design. Large Cents were minted between 1793 and 1857.

The first small cent to be struck for circulation was the 1856 Flying Eagle cent. The Flying Eagle cent didn’t last long as a design, but it will forever hold the distinction as the first small cent produced in the United States. In 1859, the small penny began a 50-year journey with the Indian Head cent, which has grown to enjoy a near-legendary status in American lore. Finally, the Lincoln Cent was first produced in 1909 and still stands as the longest running obverse design in United States coinage history.

Issued in 1864, the 2 Cent Piece has the distinction of being the first coin to bear the inscription “In God We Trust.” One of the most interesting coins in this series is the 1864 issue. There are both Small and Large Motto varieties. The Small Motto is significantly rarer than the Large Motto variety, being worth more than 10 times the price of the Large Motto.

Proposed in response to the decrease in postage rates from five to three cents, three-cent Silver pieces are the lightest-weight coins ever minted by the United States. Before the Three Cent Nickel release in 1865, it was believed that coins had to be worth as much as their Precious Metal content. The Three Cent Nickel helped the population see otherwise. This helped to alleviate the need for small change as Silver shortages led to widespread hoarding of all Silver coins.

Nickels have become one of the staples of American coinage. They were introduced after the Civil War, which made them an important part of the exchange. The first iteration of the nickel, the Shield Nickel, was widely popular, followed by the Liberty Head or “V” Nickel, the iconic Buffalo Nickel and, finally, the Jefferson Nickels. These nickels can give you a glimpse into our American heritage.

Before the nickel five cent coin's introduction in 1866, the five-cent denomination was known as the half dime. The half dime was one of the original silver coin denominations introduced just 1 year after the U.S. coinage system, which began in 1793. There are a variety of designs and types of Half Dimes available, making them fun to search for and collect.

For a very brief period, this unusual denomination found its way into the American coin catalog. The U.S. Mint released the 20 cent coin in 1875, but canceled it by 1878, making it the shortest-lived of all types of circulating U.S. coins. Consumers initially found the coins to be inconvenient and too easily confused with the quarter dollar coins, but today, U.S. 20 cent pieces are highly sought after by collectors.

Beginning with the Draped Bust design of 1796, there have been numerous varieties of United States quarter designs. Following the Draped Bust design were the Capped Bust, Liberty Seated, Barber, Standing Liberty and Washington designs. Each has its own unique beauty and place in American history. Quarters make great additions to any numismatic collection because of the beautiful designs and their special places in numismatic history.

United States Half Dollars have a long history and tradition that few other coins can imitate. Their place amongst the current monetary system is not as prevalent as in day’s past. A number of reasons correspond to its decline in circulation, but the most powerful factor was the death of President John F. Kennedy in 1963. After that tragedy, people hoarded their half dollars as a keepsake to honor the late commander in chief.

Silver Dollar coins are the most popular general circulation Silver coins produced by the U.S. Mint. They are eagerly sought after for their important value in their historical regard, their Silver content, and their face value as currency. Released in 1794, the first Silver Dollar coin featured the Flowing Hair design created by Robert Scot. The most popular of all Silver dollars is the Morgan Silver Dollar which is considered the most important and most widely collected Silver coin in U.S. history. Silver dollars are a favorite collector's item because of their size, beauty, and availability.

Produced from 1849 to 1889, $1 Liberty Head Gold Coins are the smallest denomination of Gold coinage ever produced by the U.S. Mint. Throughout its minting, the $1 Gold coin was produced in three types, but each were similar to each other. Type 1 coins are 13 mm across while Type 2 coins are slightly larger at 15 mm across. Type 3 coins, also 15 mm across, are the most common of all Gold dollars, but they are scarce today.

These smaller denomination Gold coins circulated widely throughout the United States. Their age, historical value and limited production make the $2.50 Gold Quarter Eagles a desirable addition to any investment portfolio or numismatic collection.

The $3 Gold Indian Head Princess coins are esteemed as one of the more unusual U.S. coins because of their unusual denomination and short production runs, low mintages, and unique design. This coin was created by James Longacre to separate the new coin from the two other Gold coins of similar size, the $2.50 Gold Liberty Quarter Eagle and the $5.00 Gold Liberty Half Eagle.

Called Stella after the Latin word for star, these very scarce and unusual coins have a five-pointed star depicted on the reverse. These $4 U.S. Gold coins are extremely rare (only 460 are in the original mintage) and in high demand as one of America’s first numismatic works of art. These Stella $4 Gold coins make interesting pieces in any collection with such low original minting numbers.

These smaller denomination Gold coins circulated widely throughout the United States, and were minted and distributed as coinage before President Franklin Roosevelt required Americans to turn in their Gold coins in 1933. Those coins turned in were melted into bars to help combat the economic pressures of the Great Depression. The recall of these Gold coins from circulation made these coins that were previously very common, now very scarce.

Ever since their first minting, the largest original denomination and the convenient size of the $10 Gold Eagle coins made them an instant success and one of the country's most circulated and most valued gold coins. With their historical significance, many consider these Gold coins to have a higher value than most modern 1/2 oz Gold coins.

The Coinage Act of 1849, prompted by enormous Gold finds in California, pushed Congress to authorize the mintage of the $20 Gold Double Eagle coin, which contain the highest Gold content of any regularly issued vintage U.S. Gold coin. The original Liberty design was minted for more than 50 years, but it was then followed by the truly artistic Saint-Gaudens design. Many collectors consider the Saint-Gaudens Double Eagle one of, if not the most beautiful coin the U.S. Mint has ever released.