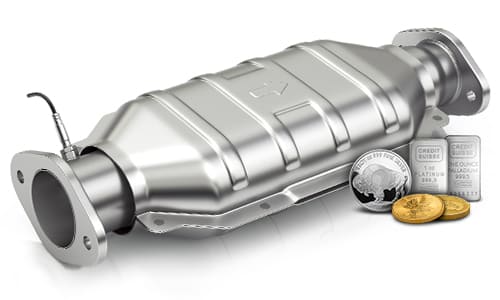 Steel, fiberglass and rubber are all commonly recognized components in modern automobiles, but you can also find a substantial amount of Precious Metals in cars. The most significant uses are Platinum and Palladium in catalytic converters, along with Silver and Gold in electronic circuit boards. While Silver-oxide batteries can be found in military vehicles, Precious Metals are not typically used in the batteries of commercial cars and trucks.

PLATINUM IN CARS
Almost all gasoline and diesel-fueled cars and trucks manufactured within the last 30 years contain Platinum. Used as a component in catalytic converters, Platinum is one of the most efficient materials at changing toxic vehicle emissions into substances that are less harmful to the environment. The catalyst, a part of any catalytic converter, is typically made of ceramic material and lined with a layer of Platinum. The amount of  Precious Metal used depends on placement of the engine, size of the car and retail price of the vehicle.

While battery-powered electric cars do not utilize Precious Metals, hydrogen fuel cell technology, an alternative to the large, slow-to-charge batteries, makes use of Platinum in catalysts.

PALLADIUM IN CARS
To reduce costs, many automobile manufacturers have transitioned to lining catalysts with a Palladium alloy incorporating both Platinum and Rhodium. These additional Precious Metals have been used in varying degrees for many years, with ratios that fluctuate with the price of Palladium and other metals. Because catalytic converters can easily be removed from most cars, harvesting and recycling the Precious Metals within has become a lucrative business. Palladium and Platinum retrieved from junk cars and trucks can be reused in lab equipment, electrodes, designer jewelry and even electric fuel cells.

Palladium is also useful in creating hydrogen fuel for some electric cars. Membranes made from Palladium, which has a high level of permeance, can efficiently filter hydrogen, excluding other gases commonly present. This use is essential because most hydrogen fuel today is produced using natural gas, which emits carbon dioxide.

SILVER AND GOLD IN CIRCUIT BOARDS
Every car and truck built today include several computers. These electronics monitor engine performance, control onboard navigation and automate hundreds of switches throughout the vehicle. These circuit boards, just like those in cell phones and personal computers, almost always include Silver and Gold as components. You can also find trace amounts of Gold in airbags, audio systems and decorative elements of luxury cars.

Silver-oxide batteries have existed for many years, but are not typically found in personal vehicles. This absence is partially because of the high cost associated with using Silver as a component. However, as the tech industry creates innovations that reduce battery sizes without limiting power, we may see Silver demand increase for electricity storage in automobiles.