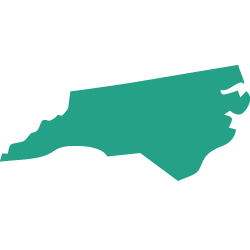 Located in the Southeastern United States, North Carolina has deep roots in Southern tradition. Sometimes called the Tar Heel State, North Carolina is the country’s largest producer of furniture, brick, tobacco, and textiles. The very first Gold strike in the United States happened in North Carolina in 1799, and indeed it was the only Gold-producing state in the U.S. from 1803 until 1828.

Today, the North Carolina cities of Raleigh and Charlotte are among the top ten fastest-growing metropolitan areas in the nation.

There is a history of minting in North Carolina. Specifically, there was once a branch of the United States Mint there.

Established in 1835 at the height of the brief-but-furious Carolina Gold Rush, the Charlotte branch of the United States Mint was purpose-built to produce Gold coins. In fact, over five million dollars in Gold coins were minted here between 1838 and the onset of the Civil War, at which point the mint closed. All of the coins minted in Charlotte bear a “C” mintmark; they are now coveted collectibles, especially by residents of North Carolina.

Precious Metal and Coin Dealers Near Me

Looking for a reputable local wholesaler near you where you might make purchases in person? Please allow APMEX to be of service. Here we provide a list of wholesale dealers who may be able to assist you:

We buy, sell, and appraise rare coins and Silver. We are available by appointment at our shop in downtown Boone. We have been trading with APMEX for years.