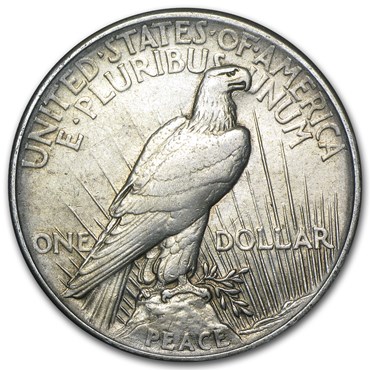 The design of the Peace Dollar is the work of sculptor and medalist Anthony de Francisci. Chosen through a nationwide competition, at 34 years old, de Francisci was the youngest competitor. When first released, the design included a broken sword. After an outcry of concern from the public that the damaged weapon seemed to be a symbol of defeat, the sword figure was removed from the overall design.

The Peace Dollar’s obverse showcases the head, neck and flowing hair of Lady Liberty, shown in profile with a radiant crown on her head. The portrait of Liberty seems to have been styled after the features of his wife, Teresa de Francisci. In addition to this female profile, the coin’s obverse features the phrase “In God We Trust” and the word “Liberty" in capital letters across the top edge. The mint year and artist monogram are also inscribed below the neck.

The reverse features the iconic American bald eagle resting with an olive branch, long regarded as a symbol of friendship and goodwill. The bald eagle is sitting on a stone perch with beaming rays of sunlight overhead. The word “Peace” is minted along the bottom edge of the reverse, and the top edge features the inscriptions “United States of America,” “E. Pluribus Unum,” and the currency increment “One Dollar.” The original design with the aforementioned broken sword depicted a more warlike bald eagle, clutching the two pieces.