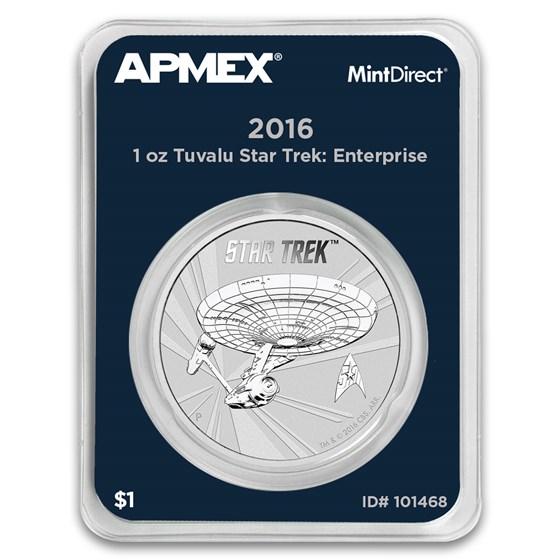 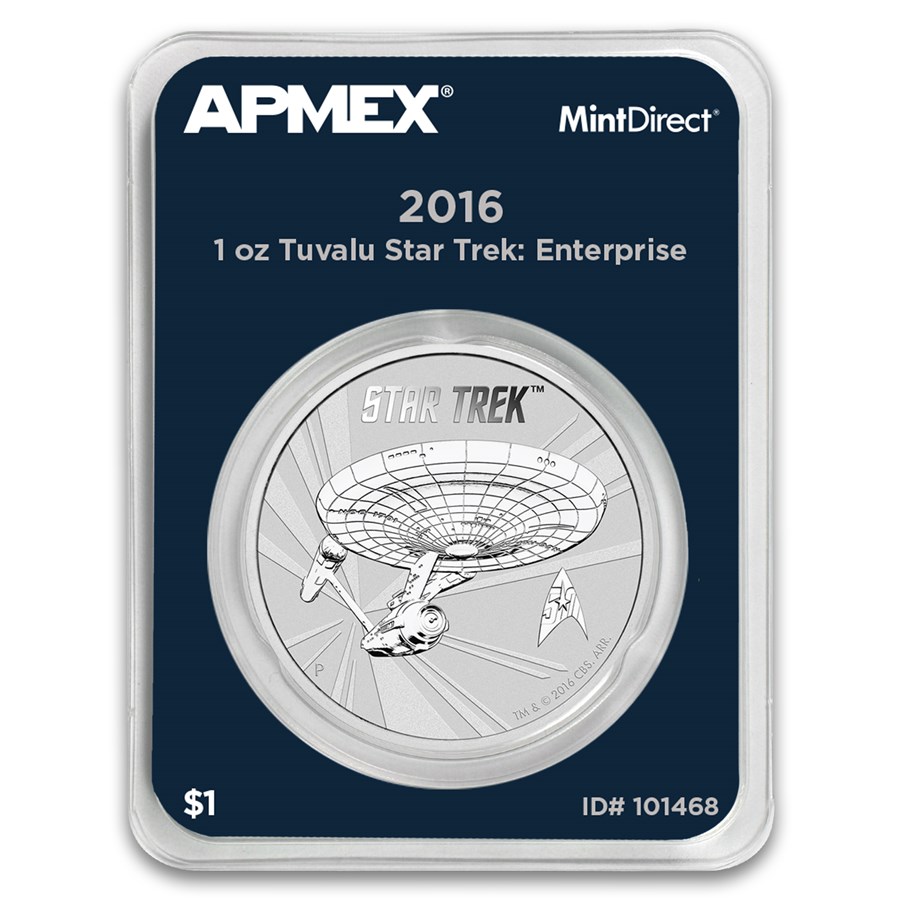 Your purchase is guaranteed to match the quality of the product shown. It will not be this exact item.
Product Details
Product Details
New from the Perth Mint is this limited mintage Silver bullion coin featuring the iconic U.S.S. Enterprise from Star Trek! This is the first Star Trek bullion coin produced, and is expected to be just as collectible as the numismatic coins.

APMEX individually seals each MintDirect® coin to ensure the authenticity and condition after the coins are removed directly from the mint boxes. Each coin is placed in a non-reactive plastic polymer authentication card to protect your coin’s finish.

Learn more about these fascinating coins by visiting our Star Trek page.

Since its debut, Star Trek has developed into a cultural phenomenon with a range of spinoff television series and a number of feature films being released over the past five decades. The series explored a variety of societal themes and issues including a Utopian society, war and peace, imperialism, economics, racial equality, religion, human rights, feminism, and the role of technology.

APMEX has created a process to guarantee these coins are direct from the Perth Mint to you to ensure that our customers receive only authentic Perth Mint coins. MintDirect® is your symbol of guarantee that these coins were processed from tubes that come straight from mint-sealed "Monster Boxes", exactly as they were delivered, providing peace-of-mind when buying, holding or selling.

APMEX individually seals each MintDirect® coin to ensure that the authenticity and condition of each coin is protected after they are removed directly from the mint tubes. The sealing process seals the coin within the authentication card, creating a tamper-evident package that will guarantee your investment indefinitely. If the tamper-evident package has been opened in any way, you will know it.

After the process is completed, the coin in tamper-evident package is removed from the machine and checked to ensure that the quality of the packaging meets our exacting standards. You now have a finished MintDirect® Single 2016 1 oz Silver Star Trek: Enterprise coin.

By using this process, APMEX can guarantee that the coins you receive are authentic and in the exact condition as they were when they left the Perth Mint. The MintDirect® process gives investors confidence in their purchase, knowing that they can buy, hold or sell an authentic coin, guaranteed.

This is a fun coin. I did not think that I was going to like it because I am not a Treki. I glad I was wrong. The Star Ship Enterprise really comes alive with the 3- dimensional artwork. As long as there are Trekies, there will be a buyer for this coin. The MintDirect® packaging does make this coin less profitable while APMEX still has them in stock. Moreover, this coin has a pretty high mintage (I have seen them on many other sites). Still, I think in 5 to 10 years, these coins may become a collector's item. Bottom line is buy the coin if you like Star Trek or just like the coin. If you are a prepper (survivalists) or a person who buys just bullion, you should pass. This is not that kind of coin.

Star Trek coin, that says it all

It's a celebration of 50 years of Star Trek in a well designed coin. Who knows what it might be worth 50 years from now. Very nice coin and in my opinion worth the money.

Yes, nice to have

I think good timing to have this coin.

I just picked it up on Thursday September 8, 2016. Yes, the same day that the Star Trek series celebrate its 50 Anniversary. The silver coin is highly polished and the Enterprise looks highly detailed as she is ready to go to a new mission. Long Live and Prosper! This is my first purchase and I'm very happy. Thank you, APMEX!

I just picked up my coin on the day the Star Trek original series celebrate its 50th Anniversary. The silver is beautiful with great polished. The Enterprise look amazing, highly detailed and she is ready to go to another mission. A great collector item!

Would like to see option to buy already installed in capsule

I'm glad I waited & didn't buy the 1/4 oz Enterprise. I didn't know that this 1 oz was going to be availabe. Then one day, I got an alert from APMEX that this new product was going to be for sale soon. I ordered it along with several other Ag coins. It's not listed as a reverse proof, but it sure looks like one & it's a beauty. This is definitely Capt. Kirk's starship. I think it looks better than the colorized version which is a lot more costly.