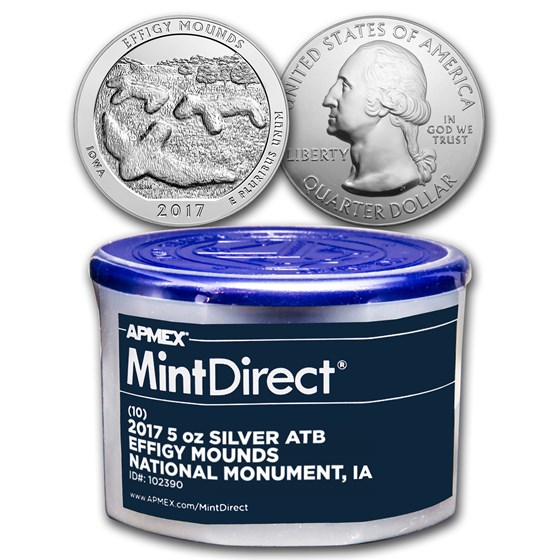 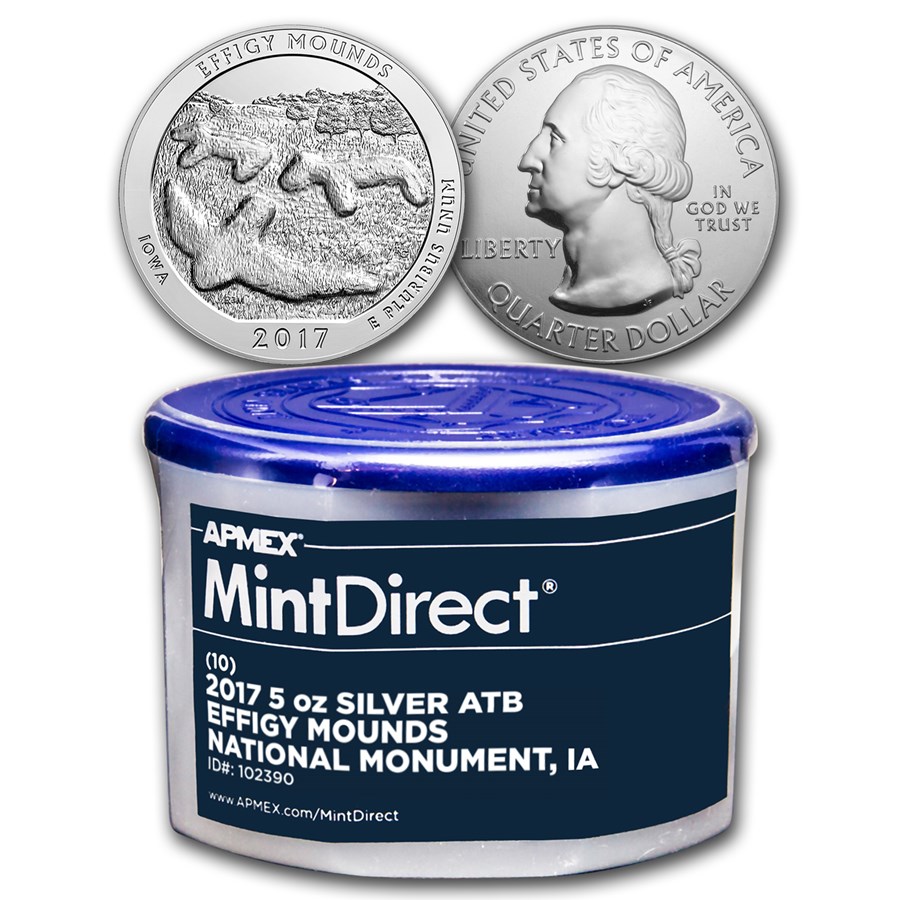 Your purchase is guaranteed to match the quality of the product shown. It will not be this exact item.
Product Details
Product Details
MintDirect® tubes of America the Beautiful Silver coins are available exclusively from APMEX® and are your assurance that these coins have not been searched through or sorted, remaining in the same condition when leaving the U.S. Mint.

Effigy Mounds National Monument protects one of the largest remaining concentrations of ancient American Indian earthworks in the United States. It is the first release of 2017 in the U.S. Mint's popular 5 oz Silver bullion America the Beautiful series.


Coin Highlights:
Protect your Silver ATB coins from blemishes by adding cotton gloves to your order.

These coins are sought after by investors for their .999 fine Silver content, and demanded by collectors for their artistic value. Add this MintDirect® tube of Silver America the Beautiful coins to your collection today!

APMEX uses a special machine to ensure the products you receive are completely sealed once they are removed directly from the mint boxes. The mint tubes are placed on a conveyor leading into the machine and the sealing process seals both ends of each tube with tamper-evident packaging. If this tube has been opened in any way, you will know.

After the process is completed, the tube is removed from the machine and then checked to ensure the quality of the packaging meets our exacting standards. You now have a finished tube of MintDirect® 2017 5 oz Silver America the Beautiful coins.

Once checked for quality, the MintDirect® tubes are stored back in the vault until they are ordered by our customers. By using this process, APMEX can guarantee the coins you receive are in exactly the same condition and packaging as they were when they left the United States Mint.

Established in 1949 the park is considered a sacred landscape by members of many modern-day tribes whose ancestors once lived here. The majority of the mounds were constructed between one thousand and two thousand years ago and are often to inter the dead, but sometimes for ceremonial purposes or to tell important stories. Today, Effigy Mounds National Monument offers an excellent view of the Mississippi and Wisconsin Rivers, and is home to a wide diversity of flora and fauna and helped shape the lifestyles and the belief systems of the moundbuilders.

In 2010, the United States Mint launched the America The Beautiful Quarter series, the mint’s first ever 5 ounce coin, and their largest Silver bullion coin to-date. The new quarter series includes a total of 56 quarter-dollar coins, each with a design of a National Park or National Site from one of the 50 states, 5 U.S. Territories and Washington D.C. The obverse design of the 5 oz America The Beautiful coin duplicates exactly the design of the America the Beautiful clad quarters used in circulation, except much bigger. This version includes a U.S. Mint Box and Certificate of Authenticity, and features “P” mintmark, whereas the Bullion version does not have a mintmark. The Bullion version has higher mintages and is available through authorized bullion dealers like APMEX, while the Uncirculated version is available through the U.S. Mint directly as well as APMEX, with much smaller mintages.