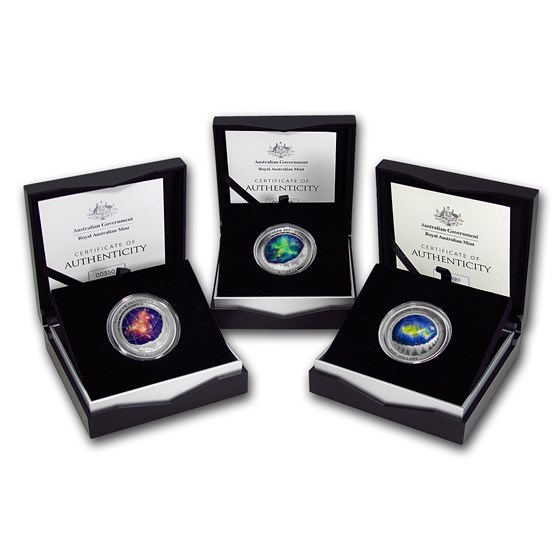 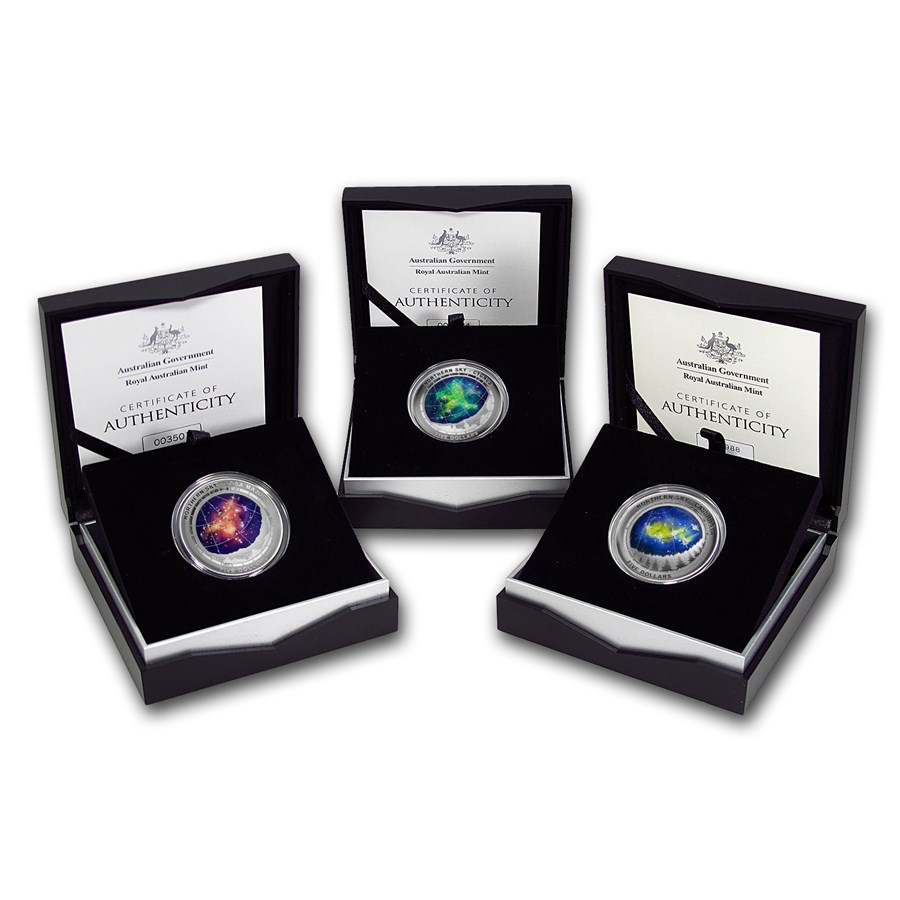 Your purchase is guaranteed to match the quality of the product shown. It will not be this exact item.
Product Details
Product Details
APMEXclusive® Reach for the stars with this captivating 2016 Australian 1 oz Proof Silver Northern Sky coins. This set includes all 3 coins from the series including: Cassiopeia, Ursa Major and Cygnus.

Set Highlights:
The Royal Australian Mint has once again produced a coin enjoyed by all. Add the $5 Australian Colored Northern Sky Domed Silver Coin Set to your cart today!

Where previously the center of the coin was completely filled with a really brightly colored depiction of the constellation, Cassiopeia had more muted colors and a clean struck crescent tree-line to enhance the sense of realism which is less clinical than the design previously employed. Some preferred it, some didn’t but both are great designs. The second coin features Ursa Major, also called the Great Bear. It’s the third largest of the 88 modern constellations and is home to I Zwicky 18, the youngest known galaxy in the visible universe.

Those who gaze at the stars in the northern hemisphere are fortunate to enjoy the sight of one of the world’s most famous constellations year-round. Ursa Major, Latin for "the greater she-bear", has been a key feature of astronomy, navigation and folklore since its declaration by Ptolemy in the second century.

The constellation, whose seven most prominent stars are commonly known as the "Big Dipper", has captured the imagination of many around the world, as evidenced through its many myths. The Micmac and Iroquois tribes of North America share tales of seven hunters whose pursuit of the bear caused her to spray her blood to turn the autumn leaves red. Romans believed the maiden Callisto was transformed into a bear by the goddess Juno, jealous of the attention that her husband Jupiter gave the maiden. Greeks believed Hera and Zeus were the feuding couple surrounding Callisto’s transformation.

This set is absolutely beautiful.

This series is sure to be a capstone for coin collectors. Low montages, unique form factor, incredible design and a fitting celestial concept for a dome shaped item - add to that the fantastic success of the first three coins in the Southern Sky series... this is a set that you can't afford to miss out on. It's symbolic in and of itself as the beginning of the mainstream success of art-coins. And they are a pinnacle representation of what set the bar high for artistic mint releases. I with the US would start to make coins this thoughtful!