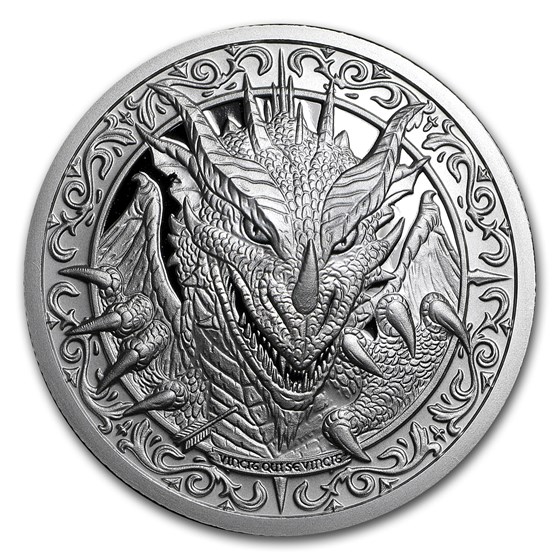 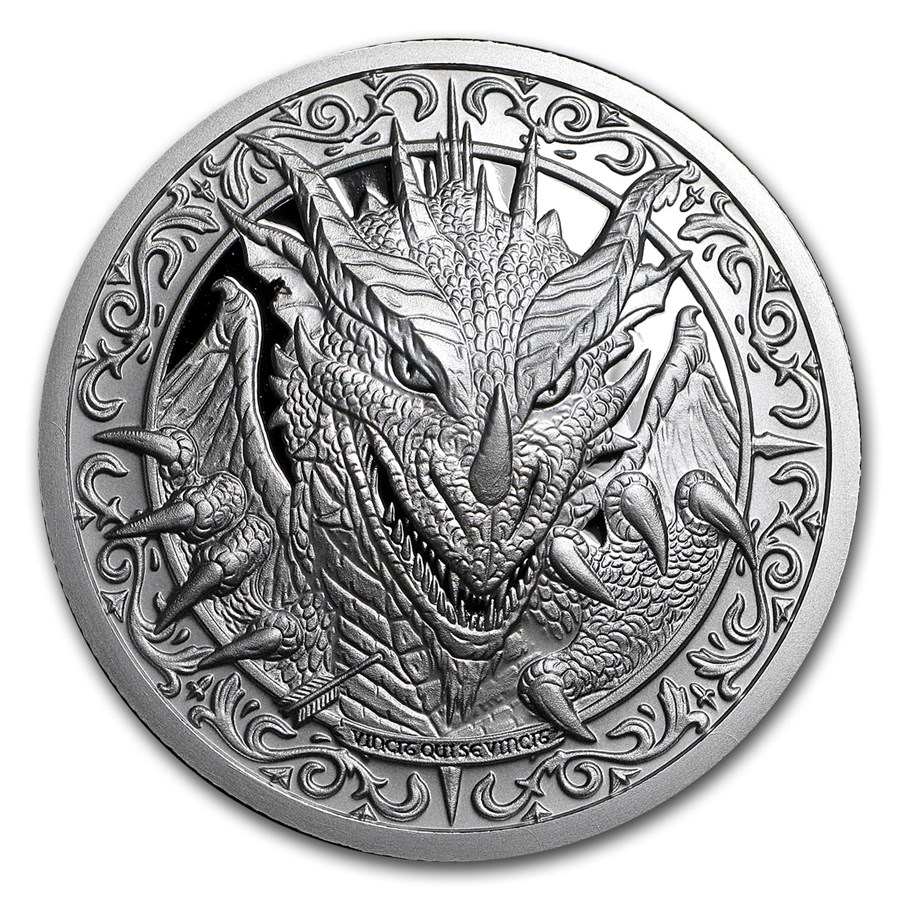 Your purchase is guaranteed to match the quality of the product shown. It will not be this exact item.
Product Details
Product Details
The second round in the Destiny Knight Series - The Dragon. Paying homage to the Scottish Knights who perished in the war against the Spanish in 1588, this 2 oz Silver round reads “Destiny Is Not A Matter of Chance, It Is A Matter Of Choice”.

Building off the success of the highly popular "Raven" release, the Destiny Coin Series is proud to announce the 2nd coin in the series "The Dragon." The Dragon symbolizes our daily eternal and internal struggles. The Dragon is weathered, smart poised and he smells your fear. The Dragon reminds us to remain steadfast, unyielding and to never surrender.

In 1588 the Clans MacIan and McDonald of Scotland were ravaged and sacked village by village by the Clan MacLean with 100 mercenaries from the ship San Juan De Sicilia of the Spanish Armada to fight with them. When the MacIan and MacDonald reinforcements arrived, MacLeans and the Spaniards withdrew their burning and sacking. The Spaniards returned to their ship. Later, the bay was rocked with a huge explosion and the Gold filled galleon sank to the bottom of the sea. Could the Clans MacIan or MacDonald have organized this deed in seeking revenge for the sackings? The story is the stuff of legends and the mystery remains to this day.

As soon as I saw the dragon on the reverse side, it was an instant buy.

By far my favorite coin...Just amazing!!

I must say everyone should have this coin!! It is absolutely stunning!! The size the weight the detail you won't be disappointed. This is definitely my new favorite and believe me I have a lot of coins. If you're on the fence, don't be. You won't be sorry with this series.

Bought one of these when they came out and I just picked up another one. One of my favorites. Detail and finish are amazing. Having trouble finding a storage capsule that it will fit in though. Bought a 40mm Air-Tite but the coin is too thick.

Large and well detailed. I love the historical, mystical, and fantasy design of the coin. Not only is it low mintage, but a cool series to collect. Once I had the dragon. I knew I wanted the others.

Impressive quality especially from a private mint. Big heavy round that will get your attention. High premium, but I can justify 1 just because it is good looking.

This coin is a real eye catcher. One of my favorite. A little expensive but well worth it.

Collecting dragons, the picture doesn't give it justice. The detail on both sides is fantastic. In the right light the eyes and teeth are greatly highlighted.

We are fond of these. Looking for more.

This is an awesome coin and a heavy 2 ounces. Incredible artwork

This is a very fine struck round. Great art work and was in great condition. For those interested there are great books on this time in history. The Raven is also cool. Price has increased since purchase even though it is lower. Great service.