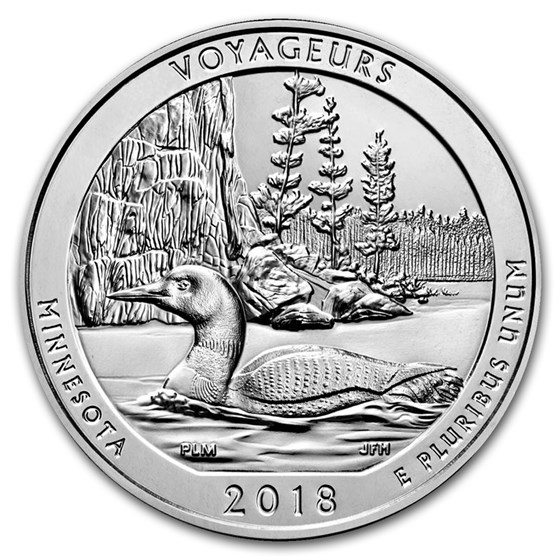 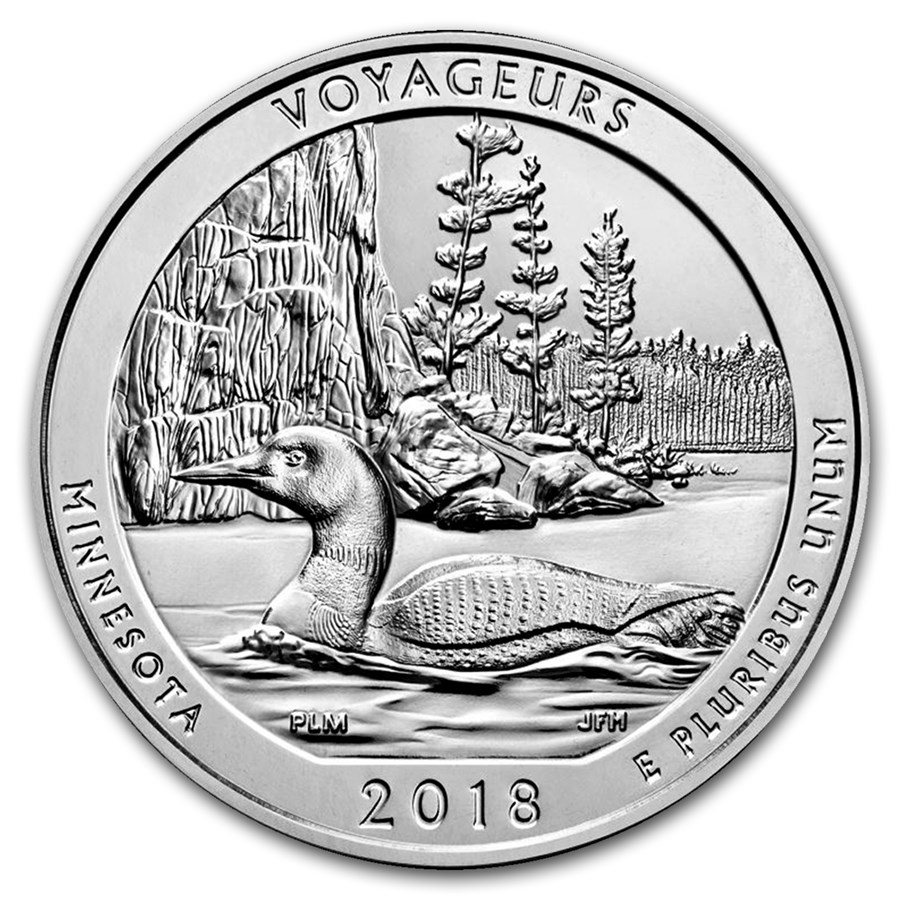 Product Details
Product Details
Voyageurs National Park, Minnesota commemorates the French-Canadian fur traders who travel the northern forests in the area. This coin is the third release of 2018 in the U.S. Mint's popular 5 oz Silver bullion America the Beautiful series.

This coin commemorates Voyageurs National Park in Minnesota. This is the 43rd release out of 56 coins. These coins are sought after by investors for their .999 fine Silver content, and demanded by collectors for their artistic value.

Voyageurs National Park in northern Minnesota was established in 1975. The park's name honors the “voyageurs”, or French-Canadian fur traders who first European settlers explore the isolated wilderness. The parks 4 major lakes, combined with rocks between 1 and 3 billion years old, make this park popular amongst kayakers and fishermen, in-fact the park’s primary access is via water. European demand for beaver pelts brought fur traders into the region and later settlers used the area for logging, mining, and fishing resources. The isolation of the park provides some of the best conditions to watch the northern lights, or Aurora Borealis. Popular sites within the park include Ash River, Ellsworth Rock Gardens, Kettle Falls, Kabetogama Lake and Rainy Lake which straddles the Canadian border.

The 43rd release out of 56 coins in the Silver ATB coins is the beautiful 2018 Voyageurs 5 ounce National Park, MN.

Just starting to buy coins, found APMEX through a search. This was the first coin I bought for myself and it came with a scratch on Washington's jaw bone, like a scar... Thankfully, the process to return the coin was very efficient and I was delivered a much better quality coin, with no visible flaws. That means a lot, the first coin you get makes a big impression, and I would have been disappointed if I had to keep a flawed coin right from the start.

I have been attempting to purchase these coins as they are available. I am a little short on the entire series, hope to complete someday.I really enjoy these 5 oz coins. This Minnesota voyagers is my favorite.These were delivered in excellent condition. Thanks A. P. M. Ex.