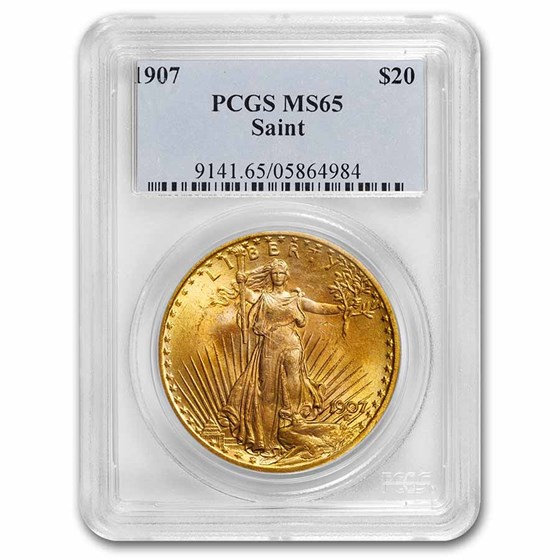 Product Details
Product Details
This first year of issue was minted during what is defined as the "Renaissance of American Coinage". Outstanding example for a high grade type set. This coin has the special First Year of Issue label with a picture of Augustus Saint Gaudens.

Coin Highlights:
Display your Saint-Gaudens Double Eagle in style by adding an attractive display box to your order.

The Gold Double Eagle was America's last circulating $20 Gold coin and displays unmatched beauty and rich history with outstanding luster. This coin was originally designed as a high relief and looked more like a medal, but was lowered for a number of reasons namely because they did not stack well and because they had to be struck multiple times which wore out the dies quicker than normal.

Saint-Gaudens had to redesign the coin by lowering the relief so that these coins could be easily stacked and struck. This coin is considered by many to be the most beautiful American coin ever produced. 1907 Saints and some 1908 Saints do not bear the motto "In God We Trust" as it was not required by law to use this motto on coinage. President Roosevelt even defended Saint-Gaudens' omission by stating that it was a profane use of God's name.