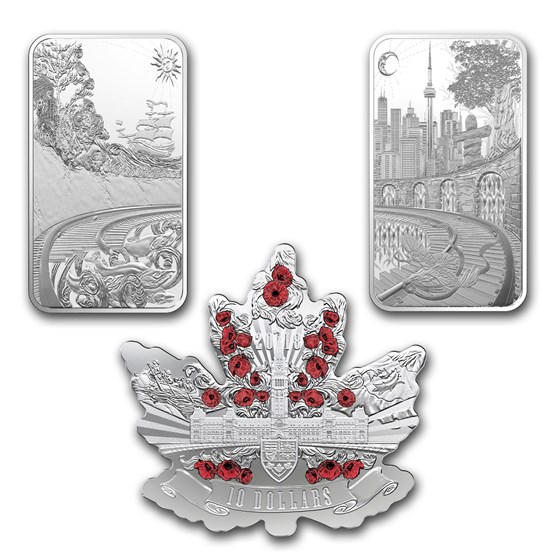 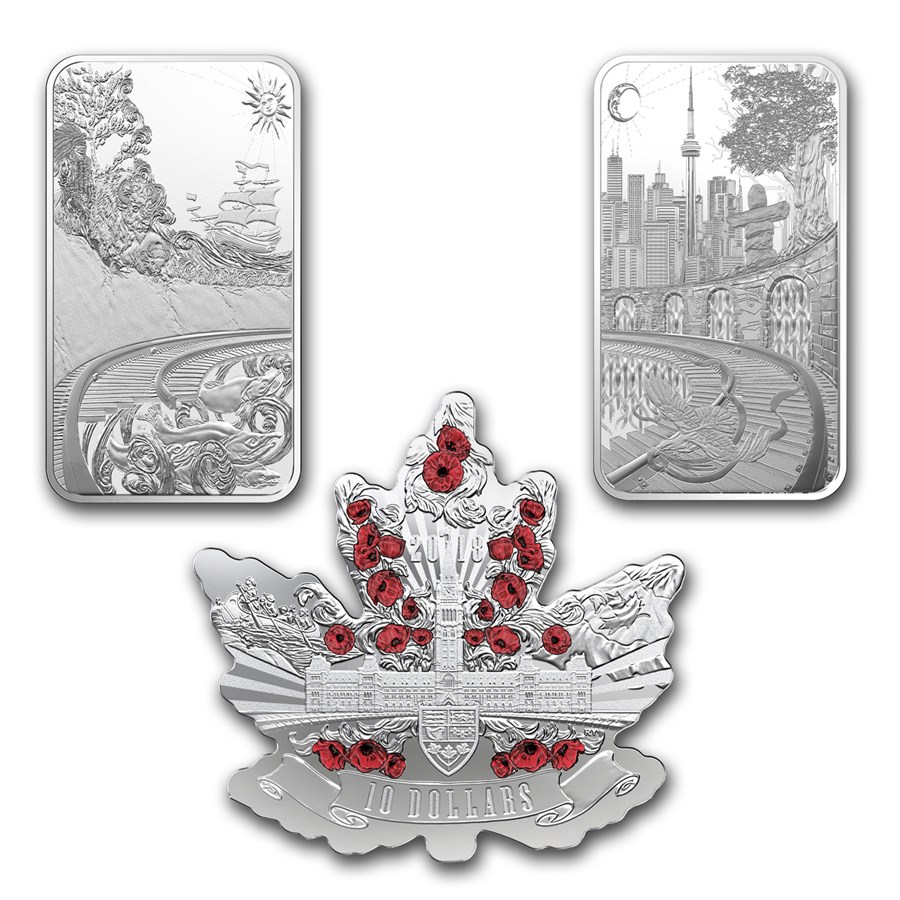 Product Details
Product Details
This three-coin set is the very first of its kind, coming together to form the flag of Canada. With three irregular-shaped coins, this set presents a rich narrative that is the story of a nation, from pre-Confederation to today and beyond.

Add this unique 3-Coin Beneath the Shining Skies set to your cart today!

Artist Rebecca Yanovskaya presents a powerful visual narrative that unfolds across the reverse of all three coins, which embody national pride and identity as they come together to form the flag of Canada. Like the railroads that played a key role in this nation’s history, a track serves as a unifying design element in this journey through Canada’s past and present; with no beginning or end, it curves its way from the first rectangular coin across the maple leaf-shaped coin, and beyond the second rectangular coin.

The engraved images on the first rectangular coin explores Canada’s pre-Confederation past, where a member of the Cree First Nations symbolizes the long history of Indigenous peoples of Canada. A towering pine represents the forests; beneath it, two bison stand next to the tall grasses that line the edge of the rock, which represents the Canadian Shield. A nautical sun guides Jacques Cartier’s ship, La Grande Hermine, which symbolizes European exploration and hints at the maritime history of the East Coast, while the salmon beneath the track is a tribute to a great cultural icon of the Pacific Coast.

The maple-leaf shaped coin explores the period between Confederation and the mid-20th century, where the transition from the Voyageurs of the fur trade era to the adoption of the flag speaks of a nation’s coming-of-age. Flanked by feathers that pay tribute to the Cree First Nations, the Arms of Canada represents the path to nationhood while the center Block building on Parliament Hill is the heart of Canadian democracy. Victorian scroll work adds a stylish flourish throughout, while selective color highlights the poppies that represent the First and Second World Wars, two events that significantly impacted Canada’s development.

The second rectangular coin’s images represent Canada today. An illustrated moon hangs over a stylized Toronto skyline, which reflects the rise of modern cityscapes across Canada. A nod to the creation of Nunavut in 1999, an inukshuk represents Northern Canada and reflects our community spirit. A majestic sugar maple tree (Acer saccharum) is a timeless feature of eastern landscapes and is associated with maple syrup; its branches spread out and mimic the circuit board graphic that represents the innovative spirit of Canadians. The curving brick wall traces the evolution of transportation, while the ribbons represent the multicultural fabric of Canada. A dove reflects a peacekeeping tradition and our hopes for the future, as the track continues on towards the future and the viewer, a reminder that we all have a role to play in shaping the Canada (and the world) of tomorrow.