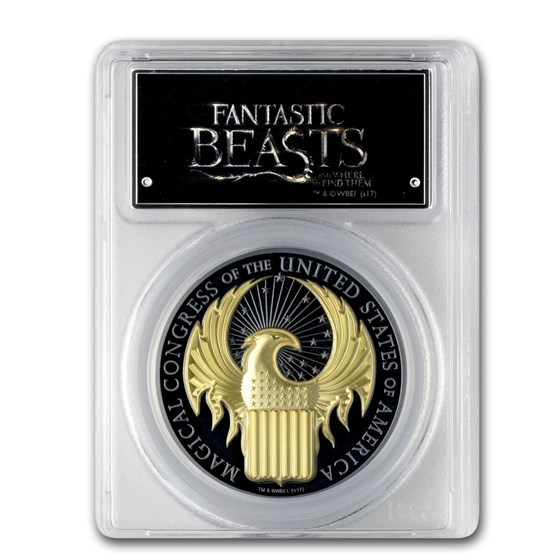 Product Details
Product Details
This coin celebrates the next movie in the iconic Harry Potter franchise, "Fantastic Beasts and Where to Find Them". Made of 1 oz of Silver in High Relief, this coin features the Magical Congress of the United States of America seal.

Fantastic Beasts and Where to Find Them is an all-new adventure returning us to the Wizarding World created by J.K. Rowling. This saga opens in 1926 as Newt Scamander has just completed a global excursion to find and document an extraordinary array of magical creatures.

Arriving in New York for a brief stopover, he might have come and gone without incident… were it not for a No-Maj (American for Muggle) named Jacob, a misplaced magical case, and the escape of some of Newt’s fantastic beasts, which could spell trouble for both the wizarding and No-Maj worlds.

Add this 2017 1 oz Silver “Fantastic Beasts & Where to Find Them" High Relief coin to your cart today!

The Magical Congress of the United States of America, known to American witches and wizards by the abbreviation MACUSA (commonly pronounced as: Mah-cooz-ah) was first created in 1693 and is the magical body in charge of governing the wizarding population of the USA.

MACUSA was modeled on the Wizards’ Council of Great Britain, which predated the Ministry of Magic. Representatives from magical communities all over North America were elected to MACUSA to create laws that both policed and protected American wizardkind.

As with most other magical governing bodies, the Department of Magical Law Enforcement is the largest department in MACUSA.
Unlike most Western countries, there is no cooperation between the No-Maj government and MACUSA.