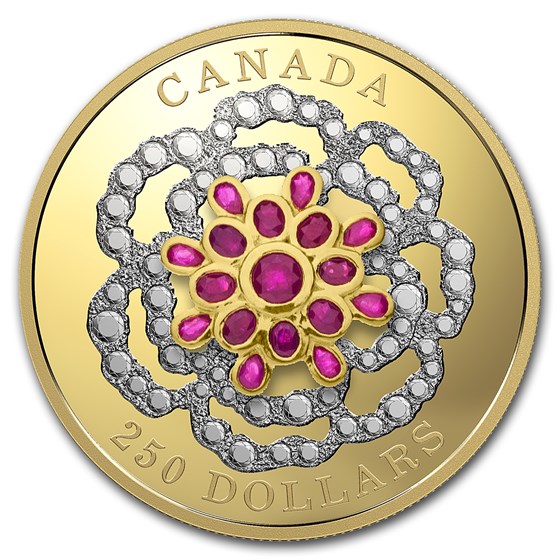 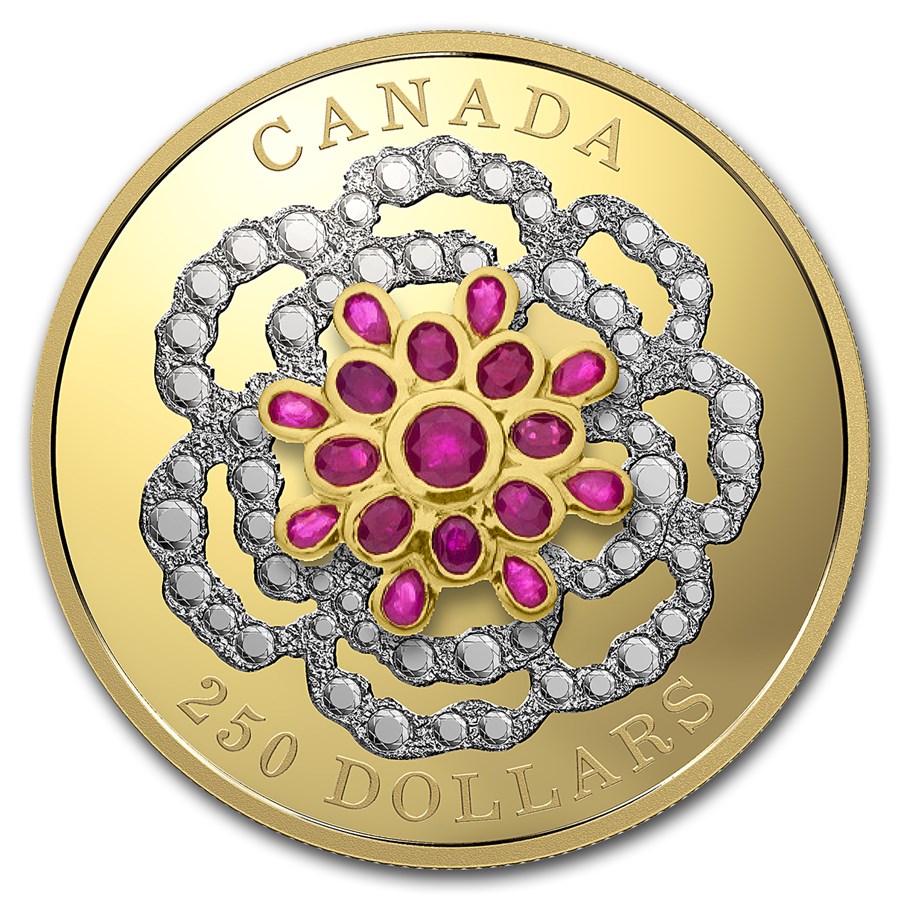 $2,096.29 $2,116.29
As Low As
16% Off The Premium
Product Details
Product Details
Sold out at the mint! Seventeen flaming red rubies shine from this exquisite Gold coin to honor The Queen's inextinguishable devotion to the Commonwealth, while selective Platinum plating completes the Tudor rose that appears on the Burmese tiara.

It's one of the few jewels The Queen did not inherit, but created herself using gemstones she received as wedding gifts. This incomparable treasure delivers a rare insight into her individuality as she continues to uphold the monarchy in modern times.

This coin is a unique keepsake that cherishes the individuality of Canada's beloved queen. Add this beautiful 2018 Canada 2 oz Gold A Crown Jewel Tiara coin to your cart today!

The ruby's inextinguishable flame has made it one of the most valued precious stones, even surpassing the diamond as the wedding stone of choice among ancients for its faithful commitment. When Her Majesty Queen Elizabeth II was given rubies as a wedding gift, the Burmese people included 96 gems to protect her from the 96 diseases believed to afflict the human body. The flaming red ruby is also believed to increase the wearer's longevity, personal power, and propel them towards their goals.

The regal ruby has certainly stood The Queen in good stead as she has served the Commonwealth longer than any of her predecessors. For Canada, no other royal relationship has been as rich and enduring as that shared with Her Majesty Queen Elizabeth II. She has been a fixture throughout the lives of most Canadians, winning more affection and respect with every passing year as she continues to serve with the same devotion she pledged over 65 years ago. To this day, Elizabeth II stands as a steadfast embodiment of traditions that date back over a thousand years, yet she has also shone as a luminary through periods of unprecedented social and technological change.

Preserving the past while adapting for the future is a rare ability, and this exceptional pure Gold coin honors The Queen with a ruby- and diamond-encrusted design inspired by the Tudor roses that adorn the Burmese Tiara. Commissioned by The Queen in 1973 and fashioned with rubies and diamonds she received as wedding gifts, the Burmese Tiara is one of the few jewels she did not inherit but created herself. It is a rare expression of her individuality as she upholds the ancient traditions of the monarchy, an unwavering commitment that shines from the ruby cluster on this rare and incomparable coin.