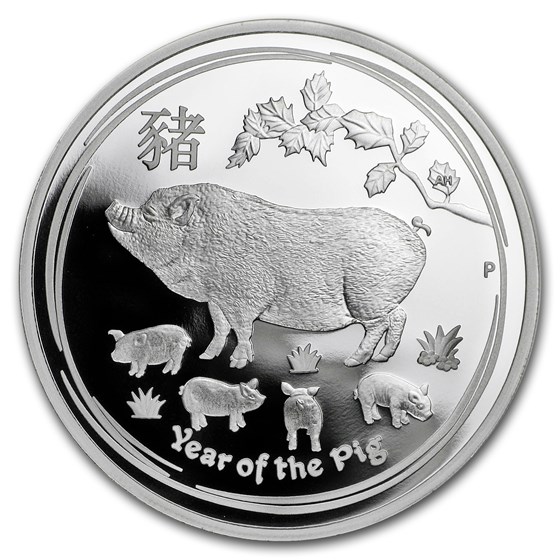 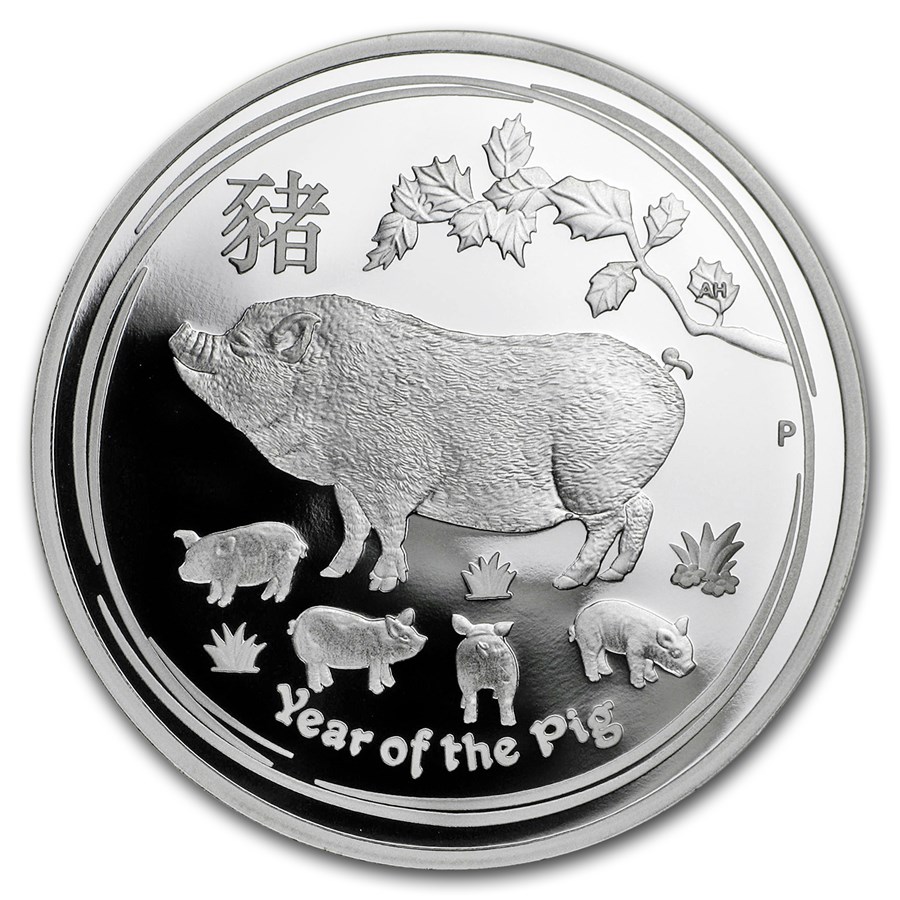 These beautiful Silver coins celebrate the Year of the Pig, the 12th animal in the 12-year cycle of the Chinese zodiac and the last coin in the Silver Lunar Series II. Each of these coins combines The Perth Mint's high-quality .9999 fine Silver content with a unique, collectible design.

Perth Mint's Australian Lunar Series II collection epitomizes the rich tradition of minting spectacular bullion coins by portraying Chinese themes. The reverse design changes each year based on the Chinese lunar calendar, and the 2019 reverse celebrates the Year of the Pig. The birth dates for people ruled by the Chinese Lunar pig include 1923, 1935, 1947, 1959, 1971, 1983, 1995, 2007 and 2019. Those born under the influence of this sign are said to be honest, sincere and generous and have a calm temperament.

A beautiful new addition to this unique series, the 2019 Lunar Pig Proof is made with one troy ounce of .9999 fine Silver. The coins are struck with a strictly limited mintage of 300,000. Marking the Year of the Pig, the reverse is decorated with a loveable pig illustration, shown in a natural habitat. The artwork incorporates the Chinese character for pig and The Perth Mint’s traditional "P" mintmark. Each sovereign coin is backed by the authority and integrity of the Australian government. The Perth Mint’s Lunar coins are sought-after collectibles throughout all continents.

Both investors and collectors view the Lunar series coins as essential to their portfolios. Each exquisite Silver coin contains a full ounce of Silver, so acquisition and storage are simple for anyone. Because mintage of this series is limited, with a new design released annually, many experts consider the Silver Lunar coins a must-have for any Precious Metals collector.

Authorized and fully backed by the government, these unrivaled Australian Silver coins pay homage to the Chinese lunar calendar. Throughout the series’ release years, all 12 animals represented on the traditional, ancient Chinese calendar will appear. Age-old philosophy suggests that certain qualities for their entire life will influence persons born during the Year of the Pig.

People born under the sign of the lunar pig are said to be considerate, optimistic and independent, perfect qualities to be represented on a Silver bullion coin. They use generosity and forgiveness to maintain balanced friendships and romantic relationship. Individuals influenced by the Year of the Pig are also said to be good-natured, loyal, honest and easy-going.

Previous editions of the 1 oz Australian Lunar Series have featured the monkey, the dog and the rooster.

The Perth Mint first introduced Silver proof coins in 1999. Each year, a new animal from the ancient Chinese calendar is depicted, indicated by the arrival of a new moon in the lunar cycle. The tradition of governing animals assigned to each birth year began around 2,600 B.C.E. This ancient philosophy teaches that your personality will be influenced by the animal associated with your year of birth, and will be similar to all other people born in the same cycle.

Because many people around the globe have an affection for the Chinese lunar calendar, Australia’s Lunar Pig coins are highly collectible. Other favorite attributes include the use of Ian Rank-Broadley's portrait of Queen Elizabeth II on their obverse, struck with beautiful detail. By order of the government, the 2019 1 oz Silver Lunar coins must feature the image of Her Majesty.

Unlike many other types of investments, Australian Lunar Pig proof coins will always hold the same purity and weight. Their value will likely appreciate over time, primarily as part of collections that contain consecutive designs from the series. Investors and connoisseurs will recognize the Brilliant Uncirculated designation as an added value to the Silver Australian Lunar Pig coin. This distinction means there are no marks of circulation; it retains its luster and original sharp relief.