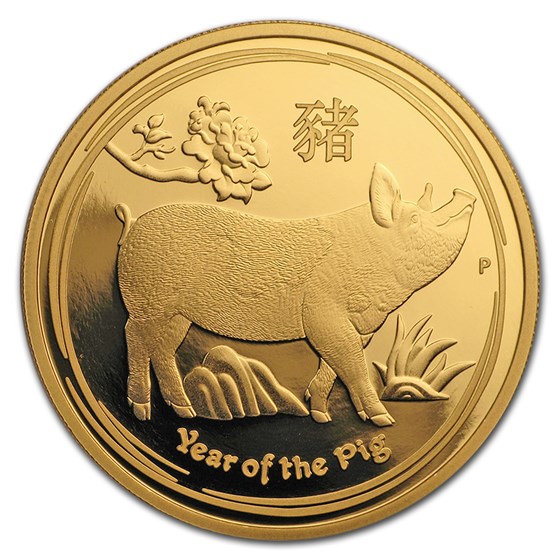 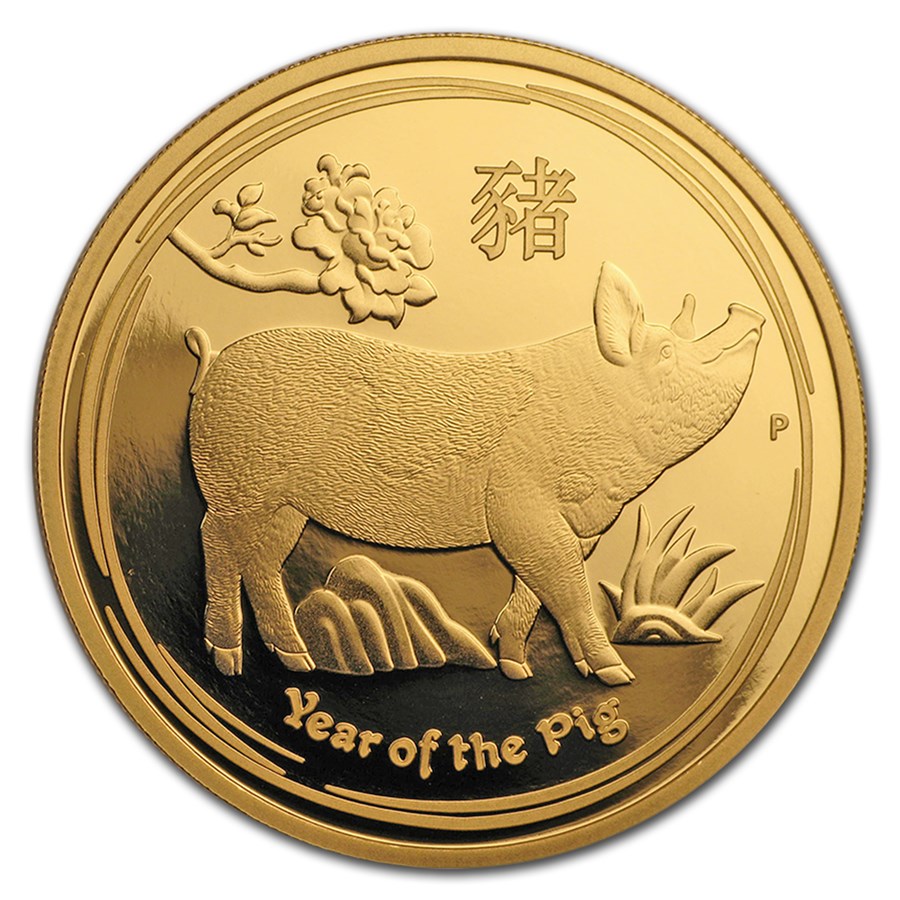 Product Details
Product Details
These magnificent 1 oz Proof Gold coins, with a mintage of 6,000, celebrate the Year of the Pig, the 12th animal in the 12-year Chinese zodiac cycle. The Perth Mint's popular Lunar Series gains even more beauty in a spectacular Proof finish.

These beautiful Gold coins celebrate the Year of the Pig, the twelfth animal in the 12-year cycle of the Chinese zodiac, and are the last coin in the Gold Lunar Series II. Each coin contains 1 oz of .9999 fine Gold, providing Gold value along with collectible appeal of the yearly changing lunar designs.

Coin Highlights:
Proudly display your 1 oz Year of the Pig Proof Gold coin by adding a lunar display box to your order.

Update your lunar set by adding this stunning 1 oz Year of the Pig coin to your cart today!

Perth Mint's Australian Lunar Series II collection epitomizes the rich tradition of minting spectacular bullion coins by portraying Chinese themes. The reverse design changes each year based on the Chinese lunar calendar, and the 2019 reverse celebrates the Year of the Pig. The birth dates for people ruled by the Chinese Lunar pig include 1923, 1935, 1947, 1959, 1971, 1983, 1995, 2007 and 2019. Those born in these years are said to be happy, easygoing, honest, trusting, educated, sincere and brave.

The Perth Mint’s Lunar Series continues for 2019 with the release of the Australian Gold Lunar Pig 1 oz bullion coin. Released every year with updated imagery that coordinates with the governing animal of the Chinese New Year, these coins are a favorite among collectors and investors in many countries. Each Lunar Pig coin is struck from .9999 fine Gold. The enchanting Perth Mint Gold Lunar Series features animals from the 12-year cycle of the Chinese calendar. According to ancient philosophy, each animal has a significant influence over those born under its year of "rule."

Because of the quality and unique design, it has become fashionable for collectors to add new Australian Gold coins to their portfolio every year. Since these coins go beyond the borders of Australia in the appeal of the design, this series builds appeal with each release.

According to Australian law, all Lunar series coins must be struck with Queen Elizabeth II on the obverse. Initially, the series used a younger portrait of Her Royal Majesty, but in 1999, the artwork was updated to depict a more mature rendering. The Perth Mint strikes each Lunar Pig Gold coin from .9999 fine Gold in Proof quality.

The reverse of each Gold coin depicts an adorable pig design that appeals to animal lovers young and old. The Chinese character for pig is also used, as well as the inscription “Year of the Pig” alongside the Perth Mint’s traditional “P” mintmark. Legal tender authorized by the Australian Currency Act 1965, Her Majesty Queen Elizabeth II is shown in the great Ian Rank-Broadley rendering. The year “2019” and the denomination are also included on each coin’s obverse.

Perth Mint Coins Through the Years

Only a limited number of 2019 Gold Lunar Pig 1 oz coins were struck. The quantities produced are much more limited than that of American and Canadian Gold coins, which means many collectors purchase from the series immediately after it is released. Made exclusively by The Perth Mint, the original Gold Lunar Series started in 1996 during the Year of the Mouse and ended in 2007 with the first Year of the Pig design. Because of global popularity with the design, a second series began in 2008 and now ends with the 2019 Lunar Pig.

Many collectors and investors are attracted to the Lunar Coin Series from Australia, even those who are not directly connected to the country. The universal appeal of the artwork is the main reason. Pigs are known to be calm when facing trouble, handling unexpected changes carefully and adequately. Ancient philosophy states that they have an enormous sense of responsibility to finish what they begin. These qualities are essential for investing, making the 2019 Lunar Pig 1 oz coin the perfect tool for helping younger investors start a lifelong journey of safe money choices.