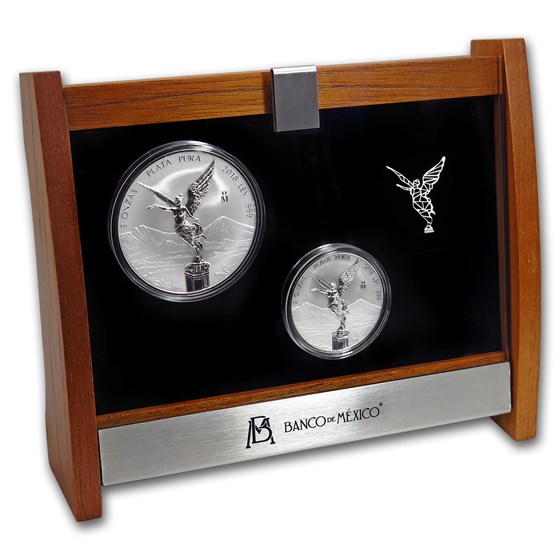 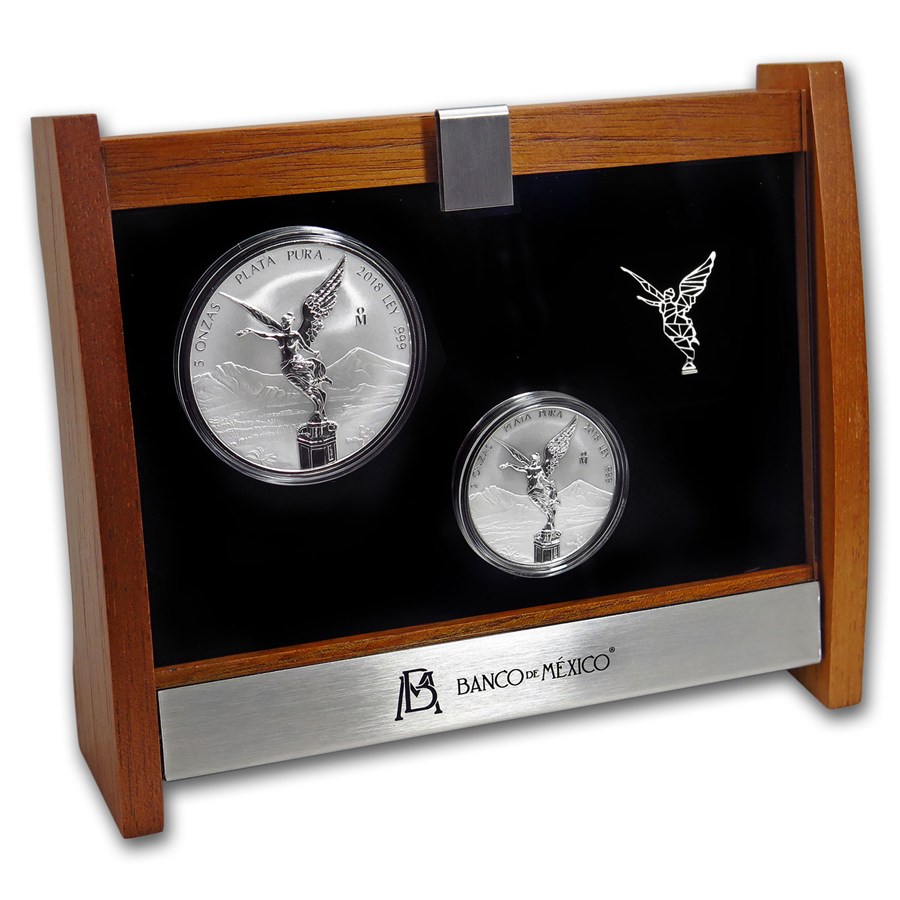 This beautiful set contains two 2018 Silver Mexican Libertad coins in Reverse Proof finishes, along with a statue of the Winged Victory. The Reverse Proof finish accentuates the coin's already impressive design, presenting Mexico's iconic volcanoes Popocatépetl and Iztaccíhuatl and a myriad of historic Coats of Arms in a highly-polished sculptural relief. The 2 ounce and 5 ounce coins also show the beauty of the Libertad coin in larger detail compared to its 1 oz counterpart. These two coins are housed in a wooden display featuring the Banco de México logo, and accompanied by a numbered certificate of authenticity.

Set Highlights:
These 500 limited sets each come with a special miniature statue and a wooden display. This gorgeous 2 oz and 5 oz Reverse Proof Silver Libertad set is a popular choice not only because of its attractive design, but also its mintage at Casa de Moneda de México, the oldest mint in North America. Add this the first year of issue of this 2018 2 oz and 5 oz Reverse Proof Silver Mexican Libertad Set to your cart today!

The Winged Victory, also known as the Angel of Independence, or the Angel for short plays a large part in Mexico's history. Originally finished in 1910, the statue of the Angel in Mexico City was built to commemorate Mexico's independence from Spain. The Angel is a version of the Roman goddess of victory, Victoria. The crown of laurel is for placing on the heads of victorious independence revolutionaries, and the broken three-link chain in the other hand represents three centuries of Spanish rule before Mexicans broke from Spain. The Winged Victory is a vital symbol of Mexico, and only fitting she be featured on the well-known Libertad coin series.

Just recieved mine today and I am absolutely 110% satisfied that I bought this set. Truly exquisite and the detailing is remarkable. Definitely will buy the 2019s when they arrive in stock. Both coins art Mint!!!