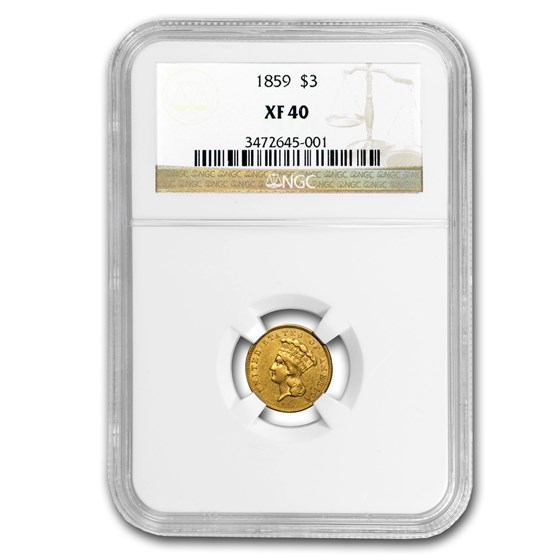 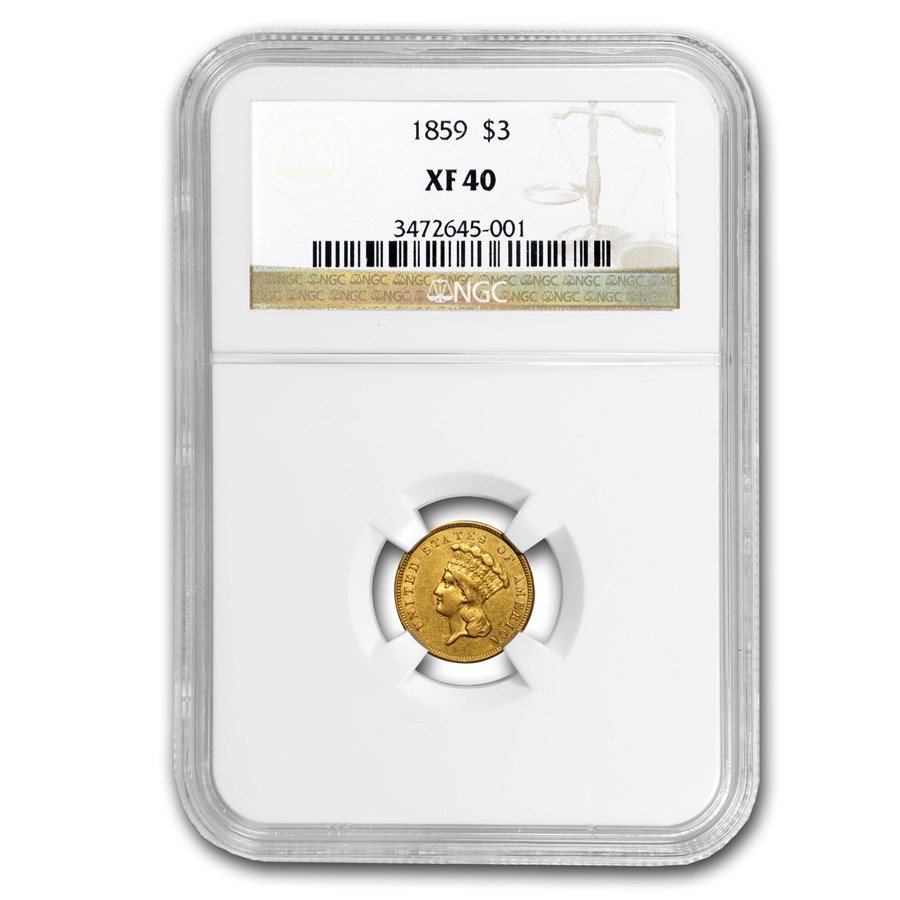 Your purchase will match the quality of the product shown.
Product Details
Product Details
The 1859 $3 Indian has a mintage of 15,558 coins. This XF-40 example has been graded by NGC.

Coin Highlights:
Protect and display your $3 Gold Piece in style by adding an attractive display or gift box to your order.

This beautiful coin is a great example of this highly collectible series. Add this coin to your cart today!

Introduced in 1854, the $3 Gold Indian was a contemporary to the Silver three cent piece. Thought to have been inspired by the then current three cent postage rate, the Gold coin came about partially in response to the massive influx of Gold flooding the market from discoveries in California.

The coin was designed by Chief Engraver James Longacre, who selected the design used throughout the type's 35 year production run. Longacre opted to represent Liberty as an Indian princess with feathered headdress, believing the Indian to be a uniquely American symbol in contrast to the classical Roman and Greek inspirations of previous designs. The reverse bore an agricultural wreath of cotton, tobacco, corn, and wheat, perhaps as a nod to the South in a time of great regional tension in the United States. In an attempt to create a tactile difference between the quarter eagle and the $3, despite their very similar weight, the $3 was struck on a thinner planchet with a diameter of 20.5 mm. The only significant change to the design during production was a change in the typeface of "DOLLARS" on the reverse between the 1854 and 1855 dated coins, the latter use a much taller font.

Because of its similarity to the quarter eagle, the $3 Indian was considered too problematic to see widespread adoption. In its later years, the coin was frequently used as a gift or jewelry piece, or in the making of love tokens. Today, the $3 Indian is highly collectible in any grade. Despite an overall mintage for the series of over half a million pieces, almost all dates are individually scarce, as few issues saw a mintage of more than 10,000 coins. Though produced for one year each at Dahlonega and New Orleans, and for 2 years at San Francisco, the vast majority were Philadelphia issues.