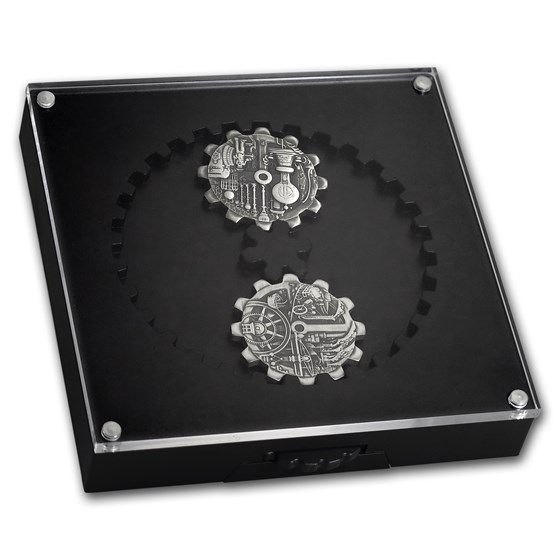 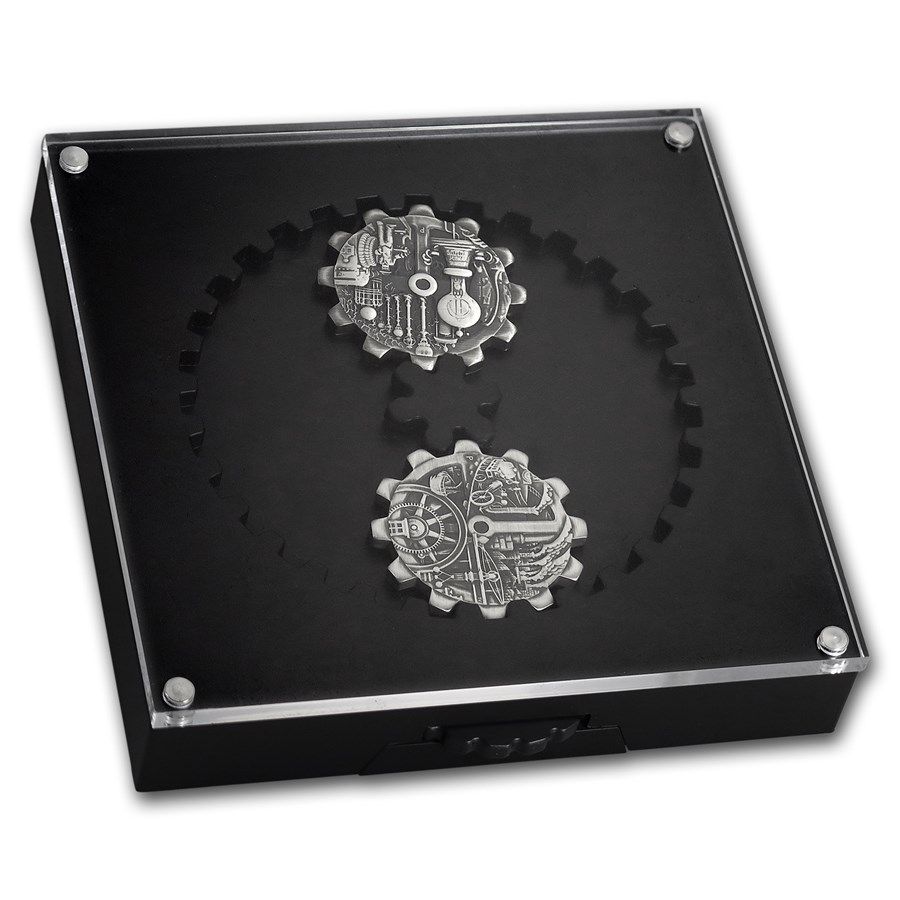 Your purchase will match the quality of the product shown.
Product Details
Product Details
Sold out at the mint! This exciting release from the Perth Mint commemorates the Industrial Revolution, featuring the two historic inventions using steam and electricity.


This coin would make a perfect gift for a loved one. Add this incredible Gear-Shaped Coin Set to your cart today!

The reverse design of the coin representing developments in steam depicts a number of significant inventions that contributed to the First Industrial Revolution. Imagery represents an early steam locomotive and the railways; the chimneys of Britain’s mills and early factories which used steam power for driving machinery on a large scale; a flywheel and other components symbolizing elements of Boulton and Watt’s steam engine; and an early steamboat similar to the type pioneered for use on the Forth and Clyde canal by William Symington.

The reverse design of the coin representing electricity depicts a representation of Thomas Edison’s incandescent light bulb. The inventor himself is symbolized at Pearl Street Station in front of its electrical generating equipment. The design also incorporates a representation of spectacular electrical discharges from a Tesla coil, a system invented in 1891 that produced extremely high voltages used by Tesla in experiments aimed at achieving wireless transmission of energy.

The Industrial Revolution, which began more than 200 years ago, ushered in enormous changes to human society. Handcraft workers from rural communities moved to densely packed urban environments where they were employed for long hours in grimy factories dominated by noisy machinery. Driven by the invention of new technology and adoption of new processes, the industrial revolution had dramatic effects on economics, politics and culture, shaping the world in which we now live.

Fundamental to mechanization was the development of Boulton and Watt’s steam engine. One of its first applications was pumping water from mine shafts at the growing number of collieries required to satisfy another key facilitator of industrialization – coal.
Beginning around 1870, the Second Industrial Revolution, also known as the Technological Revolution, marked a new, even more rapid phase of industrialization. It was characterized by many important inventions, notably in electricity which replaced steam as the main source of industrial power