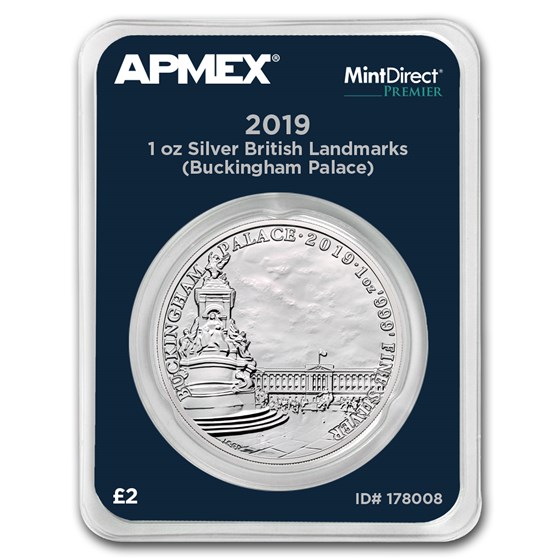 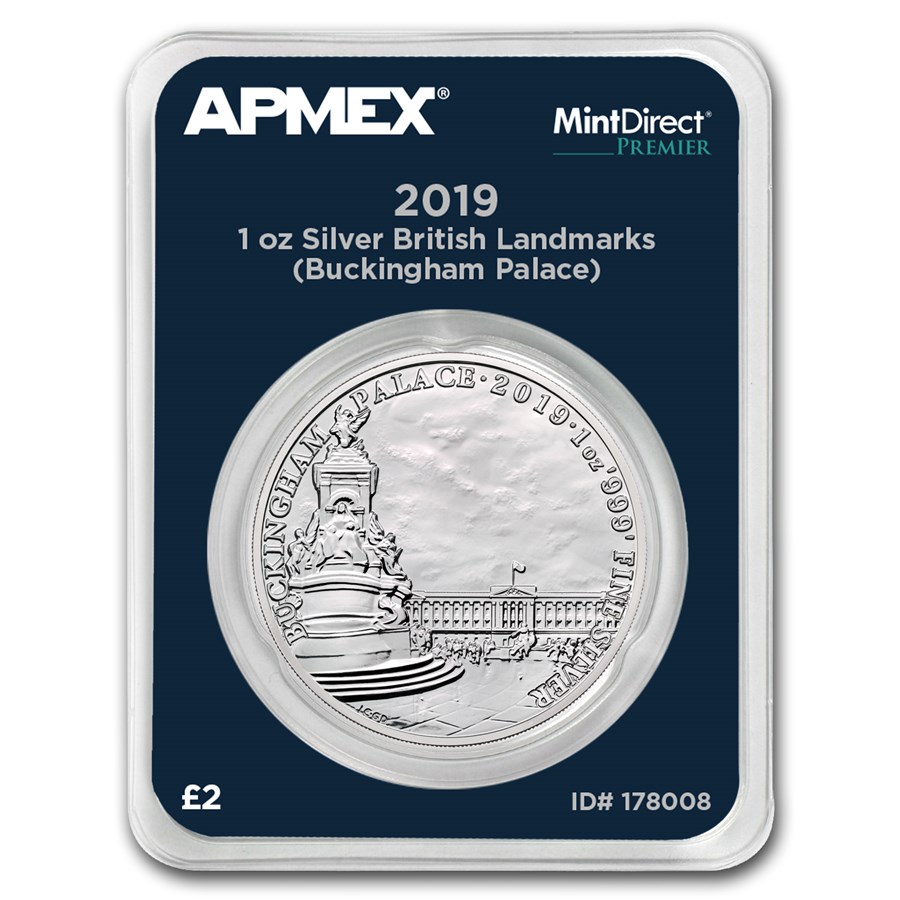 $28.30
As Low As
Product Details
Product Details
This is the fourth and final coin in the Landmarks of Britain bullion series from The Royal Mint. APMEX individually seals each MintDirect® Premier coin to ensure the authenticity and condition after the coins are removed directly from the mint boxes.

This process requires the coins to be removed from their original capsules. Each coin is placed in a protective, non-reactive plastic polymer authentication card to protect your coin’s finish. This process seals the coin within the card, creating a tamper-evident package that guarantees your investment indefinitely. Learn more about the tamper-evident process here.

Coin Highlights:
Secure your Silver Landmarks of Britain Buckingham Palace by adding an attractive display box to your order.

Each year, The British Royal Mint introduces coins with the new year's date on them. New dies are engraved, prepared and deployed to strike the coins for each year.

The coin dies wear down over thousands of strikes, causing the details of the engraved die that transfers to the newly struck coin to flatten, diminishing the quality of the finished coin below standards. At this point, the dies are replaced. For each minting press, new dies may be required multiple times each year.

Once the new dies are installed, the strike quality (the detail transferred to the newly struck coin) returns to its maximum. There is no public notice that dies are changed, and each minting press changes dies at different times required by die wear.

Because each new year brings new dies, APMEX has designated all products delivered by The British Royal Mint during the first 30 days of their issuance that go through the MintDirect® process as MintDirect® Premier.

APMEX individually seals each MintDirect® Premier coin to ensure that the authenticity and condition of each coin is protected after they are removed directly from the mint tubes. Each coin is placed in a protective authentication card composed of a non-reactive plastic polymer to protect your coin’s finish.

By using this process, APMEX can guarantee that the coins you receive are authentic and in the exact condition as they were when they left The British Royal Mint. The MintDirect® process gives investors confidence in their purchase, knowing that they can buy, hold or sell an authentic coin — guaranteed.

Buckingham Palace
Buckingham Palace is only fitting to be the last coin in the Landmarks of Britain series, due to its significance of being the London residence and headquarters of the United Kingdom monarchy. While The Queen holds many official events and receptions at the famous landmark, the State Rooms are open to visitors for touring in the summers. Buckingham Palace has 775 rooms, with 19 State rooms, 52 Royal and guest bedrooms, 188 staff bedrooms, 92 offices and 78 bathrooms. The palace is also the center and focal point for significant national celebrations.

The picture of Buckingham Palace should have been a little larger. Wonderful packaging. I love this series of coins.