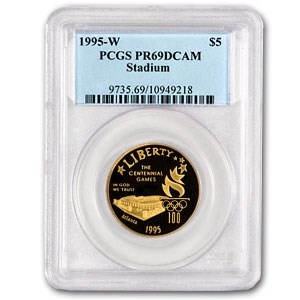 Celebrating the centennial of the modern Olympic games held in Atlanta in 1996, this $5 Gold coin features an the Olympic Stadium along side the Atlanta Olympic Games Logo on the obverse. The reverse shows an eagle holding a banner with the centennial dates of the Olympics in its beak. This coin is graded Proof 69 Deep Cameo by PCGS.